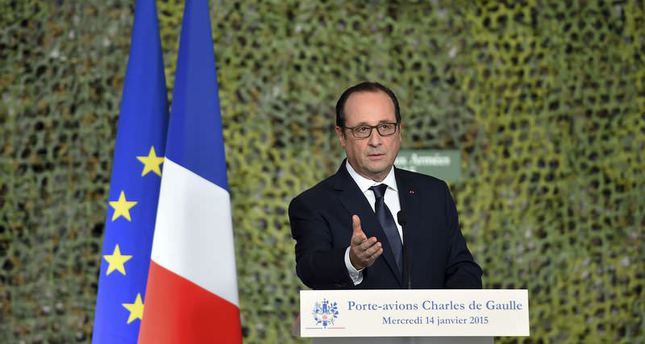 by Jan 14, 2015 12:00 am
French President Francois Hollande on Wednesday criticised the international community for the slow response to the conflict in Syria, in a speech to troops aboard the Charles De Gaulle aircraft carrier.

"I continue to regret the fact that the international community did not act in the required time to stop massacres in Syria and prevent extremists from gaining even more ground," he said.

The aircraft carrier is to be deployed to the Gulf to support operations against the self-proclaimed Islamic State of Iraq and al-Sham (ISIS) group where France is carrying out air strikes as part of a US-led coalition.

The carrier has a fleet of air and naval craft, including Rafale and Super Etendard fighter jets and an attack submarine.

Hollande's address to the troops comes with the country in mourning after being struck on home soil in a series of jihadist attacks that left 17 people dead last week.

French lawmakers on Tuesday overwhelmingly approved continuing the air strikes after Prime Minister Manuel Valls warned "our mission is not over... we are faced with a war against terrorism."
Last Update: Jan 15, 2015 12:10 pm
RELATED TOPICS