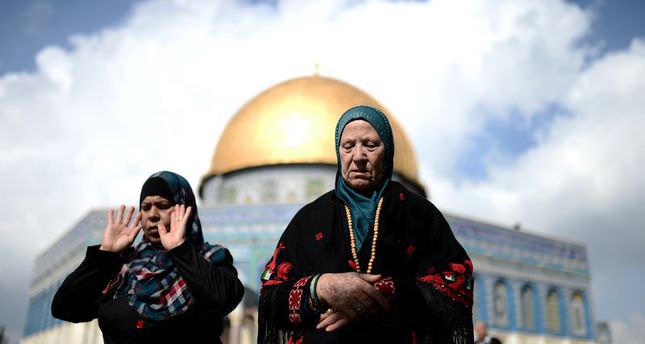 by AA
Jan 15, 2015 12:00 am
Israeli police chief Yohanan Danino has criticized visits by Israeli officials and lawmakers to Temple Mount (the Jewish name for Al-Aqsa Mosque complex), saying these visits pose "a threat to the continued existence of Israel."

"We are a country that is constantly under threat of annihilation, and this is something our neighbors have made very clear to us," Danino was quoted by Israel's Channel 7 as saying at a ceremony at Hebrew University late Wednesday.

"To me, the Temple Mount is no less of an existential threat to Israel than any [nuclear] bomb," he said, referring to Israel's longstanding concerns of Iran's nuclear program.

For Muslims, Al-Aqsa represents the world's third holiest site. Jews, for their part, refer to the area as the "Temple Mount," claiming that it was the site of two Jewish temples in ancient times.

Tension has run high in the region since late October, when Israel briefly closed the flashpoint site in occupied East Jerusalem after an extremist rabbi was shot and injured by a Palestinian man in West Jerusalem.

The shooting suspect was subsequently killed by Israeli forces in a raid on his East Jerusalem home.

Further aggravating the situation, a handful of Israeli MPs and scores of Jewish settlers have forced their way into the mosque complex in recent weeks, drawing the ire of Muslim worshippers and official condemnation from Arab and Muslim countries.

Danino also referred to statements by public officials that they want to change the status quo in the site despite Jewish prayer being banned by the Jordanian administration of the complex.

He went further to accuse some lawmakers of visiting the site for political gains. "They are inciting the entire Muslim world just to get some votes. The results will be a tragedy for Israel," he said.

"When elected officials say 'I am ascending the Temple Mount in order to change the status quo,' they become a security threat to the State of Israel," Danino added.

Since the 1950s, Jordan has administered and overseen all Muslim and Christian religious sites in Al-Quds.

A 1994 peace treaty that normalized relations between Jordan and Israel recognizes Jordan's special supervisory role over holy sites in the historical city.

Ties between the two neighbors recently soured, however, after an Israeli lawmaker proposed legislation that would revoke Jordanian oversight of Palestinian holy sites in violation of the terms of the 1994 treaty.

Israel occupied East Jerusalem during the 1967 Middle East War. In 1980, it unilaterally annexed the area and claimed Jerusalem as the unified capital of the self-proclaimed Jewish state-in a move never recognized by the international community.