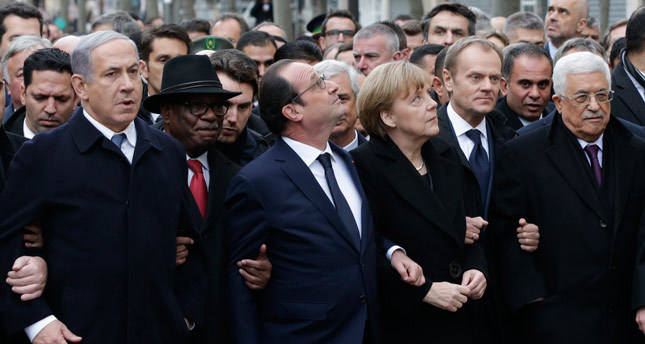 Ahead of the general elections, Israeli Prime Minister Netanyahu's presence in Paris showed that his political history has given him a bad reputation in Europe and around the world

After the latest terrorist attacks in Paris, thousands of people came together at the huge anti-terror rally in Paris. A significant number of world leaders expressed solidarity with the country, but one took the spotlight. Israeli Prime Minister Benjamin Netanyahu was harshly criticized for his presence at the rally due to his controversial policies against Palestine.

Amid the criticisms, leading media outlets around the world also claimed that French President Francois Hollande had asked Netanyahu not to attend the rally, fearing that his presence would be divisive.

President Recep Tayyip Erdoğan also criticized Netanyahu's presence at the rally: "With what nerve did he go there? I'm having trouble understanding this."

Speaking to Daily Sabah about the latest developments, Sir Vincent Fean, who served as British consul-general in Jerusalem from 2010 to 2014, said that there is deep and growing frustration in the capital cities of the European Union with Israel.

"Sweden acted courageously and honorably in recognizing Palestine last October. The parliamentary votes in the U.K., France, Ireland, Belgium, Spain and the European Parliament expressed the will of informed public opinion in Europe. The Christian churches are also active – in the U.K., the Anglicans and the Catholics have spoken out in favor of recognition, echoing the sentiments of His Holiness Pope Francis during his historic visit to the Holy Land last May. This is more than symbolic. It is an indication that the conduct of the occupation, including the systematic settlement policies of the last Israeli government, has provoked frustration and anger in Europe with negative consequences for Israel's reputation in Europe and in the wider world. The trend toward recognition of Palestine will only grow in the absence of genuine, soundly-based negotiations."

Fean, who also served as ambassador to the occupied Palestinian territories, said that after the Israeli elections the international community should play a more active role to reach an agreement in negotiations.

"I believe the time has come for the U.K. to accord the same recognition to Palestine, validating the second state in the two-state solution without in any way affecting the status of the first state, Israel. After the Israeli elections, the international community, including the key regional actors of Egypt, Jordan, Turkey and Saudi Arabia, should come together with the two parties directly concerned to construct a lasting peace that will benefit us all. The framework of the Arab/Islamic Peace Initiative of 2002 remains valid."

Fean said that Turkey plays a key role in relations between Palestine and Israel:

"Turkey has a key role to play after the Israeli elections , but also now. Turkey has good channels of communication with both the PLO [Palestine Liberation Organization] in Ramallah and with Hamas. Gaza needs international help to see people safely through the winter. Just as the buildings and the utilities need repair, so does the politics. For the good of all their people in Gaza, the West Bank and East Jerusalem, the politicians need to resolve their differences and act in concert at last. Specifically, Turkey can broker a lasting non-aggression pact between Hamas and Israel after March 17 for neither party to initiate violence against the other. That would be a huge step forward."