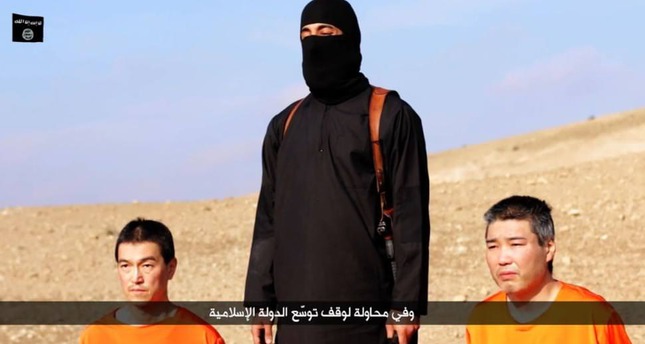 by Jan 20, 2015 12:00 am
The self-proclaimed Islamic State of Iraq and al-Sham (ISIS) group has threatened to kill two Japanese hostages unless Tokyo pays a $200 million ransom within 72 hours, in a video posted on the group's website on Tuesday.

In the video, a black-clad militant brandishing a knife addresses the camera in English standing between two hostages wearing orange jumpsuits.

"You now have 72 hours to pressure your government into making a wise decision by paying the £200 million dollars to save the lives of your citizens," he says.

"I strongly demand that they not be harmed and that they be immediately released," he said at a news conference during a visit to Jerusalem. "I am extremely indignant at such an act."

"The international community will not give in to any form of terrorism and we have to make sure that we work together," Abe said as he wound up a six-day tour of the Middle East, which also took him to Egypt and Jordan.

Here are brief profiles of the two hostages.

Haruna Yukawa is a 42-year-old widower who reportedly has a history of attempted suicide and self-mutilation. Yukawa opened a military goods shop in Chiba, outside Tokyo, after leaving high school, according to a website affiliated with the popular Sankei newspaper.

He married in 2000, but his business soon went bankrupt and his wife later died of cancer, the website has said. Citing his father, the website said a devastated Yukawa changed his original name -- Masayuki -- to Haruna, usually a woman's name, in the belief that the Chinese characters used would herald a shorter life.

The website said he had tried to kill himself and had cut off his own genitals. Yukawa came to widespread attention in Japan when footage of his apparent interrogation in the Syrian scrub was posted online last August.

He was seen lying on the ground, with matted brown hair and wearing a black T-shirt stained by dust and sweat, as blood trickled down his face. Yukawa offered brief responses to questions posed in English about why he was in Syria and the reason he was carrying a gun.

He replied in stilted English that he was a "photographer" and a "journalist, half doctor", as his interrogators accused him of lying, with one placing a long knife near his chest. "I'm no soldier," he said.

Another video surfaced showing a man believed to be Yukawa test-firing an AK-47 assault rifle in Syria. The same video could also be seen at the website of Tokyo-based private military firm PMC, which lists Yukawa as its chief executive. Pictures on the website show him with right-wing Japanese activists.

Its website said the firm has branch offices in "Syria, Turkey, Iraq, Africa", and it says its services include providing "security abroad".

Kenji Goto is a freelance journalist who established a video production company, named Independent Press, in Tokyo in 1996, supplying documentaries on the Middle East and other regions to Japanese television networks, including public broadcaster NHK.

Goto has apparently been out of contact since late October after telling family that he intended to return to Japan, NHK reported.
In early November, his wife received email demands for about one billion yen ($8.5 million) in ransom from a person claiming to be an Islamic State group member, Fuji TV said.

The emailed threats were later confirmed to have come from a sender implicated in the killing of US journalist James Foley, Fuji TV said. The Japanese government is believed to have discreetly started investigations after the threats contained information that only Goto himself would know, the broadcaster said.

Goto was born in Sendai, Miyagi, in 1967, according to the company's website.