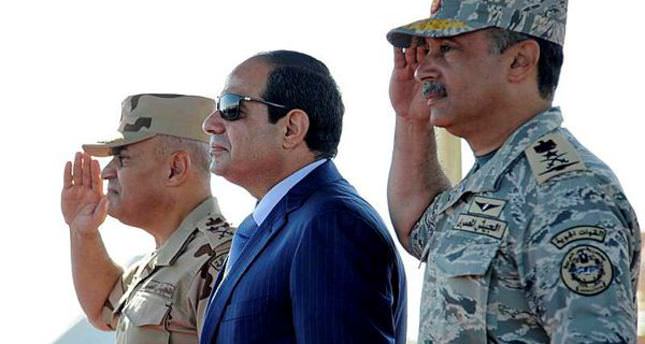 Egypt's President Abdel-Fattah el-Sissi, who headed a bloody military coup in 2013 that resulted in the ouster of the Egypt's first democratically elected president, Mohammed Morsi, paid an official visit to Saudi Arabia that pledged its support for the coup both politically and economically.

Sissi visited the United Arab Emirates on Monday. Sissi made a lightning stop in Riyadh to wish the ailing Saudi King Abdullah good health, official media reported. He was met by the heir to the Saudi throne, Crown Prince Salman bin Abdulaziz, at King Abdulaziz Medical City where the monarch was admitted for tests on December 31.

The royal court announced on January 2 that King Abdullah had pneumonia and was breathing with the aid of a tube. Since then, there have been no updates on his condition but the official Saudi Press Agency has reported that numerous Saudi and foreign officials have been "reassured" about his health. "President al-Sisi wished the Custodian of the Two Holy Mosques every health and quick recovery," SPA said, adding that Sisi then left the kingdom.

Saudi Arabia has played a key role during the bloody military coup in terms of supporting Sissi economically. The oil-rich country gave more than $10 billion in cash and promised to continue its support both economically and politically as Sissi came under fire for ousting the democratically elected president.

Saudi Arabia has also increased its pressure and ordered the other Gulf countries to do so, over Qatar since it supported the Muslim Brotherhood and welcomed its members. After Saudi Arabia and UAE withdrew their ambassadors from Doha, the tiny country was forced to pledge 'full support' for Egypt.

Abdullah was the first head of state to visit Cairo after Sissi's election win last May, and last August the Egyptian leader reciprocated with a trip to the Saudi Red Sea city of Jeddah for talks with Abdullah.