NATO and Russia to restore communications amid Ukraine crisis 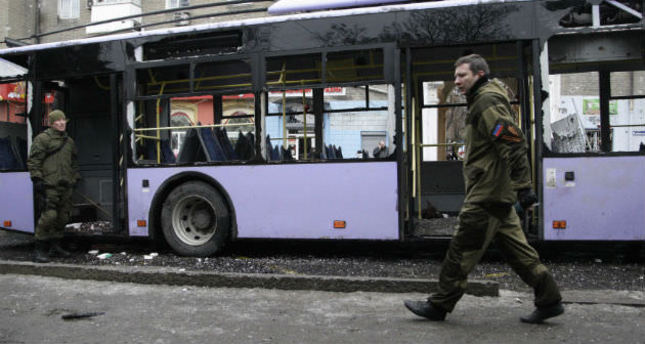 The relation between NATO and Russia that deteriorated after the crisis has broken out in Ukraine is at the crossroad as the two historical opponents seek a way of restoring the relations. Since Russia's annexation of Crimea in March 2014, NATO-Russia relations have been strained more than ever amid Russian engagement in the Ukraine crisis, as both sides see the other as the number one threat.

The U.S. General Philip Breedlove, who heads the U.S. European Command, and is the NATO supreme allied commander in Europe, underscored the importance of re-establishing communication with Valery Gerasimov, chief of the general staff of Russia's armed forces, in a joint press release following the 172nd NATO Chiefs of Defense meeting on 22 January. The NATO general claimed that the line of communication between NATO and Russia has remained open, as he spoke to the Russian general after the invasion of the Crimean peninsula. It is important to note here that General Breedlove's comments came amid Russia's alleged move to position nuclear weapons on the Crimean Peninsula.

Moscow earlier stated that there might be some contact with NATO in matters of security. "We call for a return to the path of constructive cooperation both in bilateral relations and in the international arena," said Russian Foreign Minister Sergei Lavrov, while accusing NATO members of maintaining "the mentality of the Cold War" by "cut[ting] off all contacts with the Russian Federation. "But dialogue is possible only on the basis of equality and taking into account each other's interests," he continued.

Consistently at odds, there has been a strained relationship between NATO and Russia due to conflicting interests. Russia remains the biggest challenge for the North Atlantic alliance. Apart from the intensified Ukraine crisis and Russian annexation of Crimean peninsula, there has been a long history of deteriorating bilateral relations. Recalling the Georgia conflict in 2008 and Russian recognition of South Ossetia and Abkhazia, tensions had increased following NATO military exercises in Georgia. "The defense of Europe against Russia" has remained the alliance's core function.

Russia adopted a new military doctrine on Dec. 26, taking a stronger position in response to the West's sanctions on Russia over the Ukraine crisis. A new military doctrine signed by Russian President Vladimir Putin identified NATO as Russia's number one threat, just as it was during the Cold War.

"NATO is not a threat to Russia. Our goal is to re-establish... the norms of conduct among nations here in Europe that held for many years, and we will work constructively in ways to re-establish those norms where we respect international borders and we respect the sovereignty of nations," U.S. General Breedlove said.

Russian aggression in the Ukraine crisis has resulted in the deterioration of the post-Cold War security order in Europe that had been protected under the NATO-Russia founding act signed in 1997, the aim of which was to build peace and security in the Euro-Atlantic area. However, both the West and Kiev assert that Russia has blatantly breached the principles of the founding act, disregarding Ukraine's sovereignty, independence and territorial integrity, signaling a more strained relationship between Russian and NATO.

Considering the renewed armed hostilities in the restive east of Ukraine, NATO's top military commander General Philip Breedlove stressed that fighting in the Ukraine has returned to pre-truce level. "The fighting has intensified to pre-agreement, pre-stand-down levels and in some cases beyond," he said.

Russian military presence inside Ukraine's border was confirmed by U.S. general Breedlove, in the face of Russia's strong denials. Yet, the specific number of Russian troops inside eastern Ukraine has not yet been confirmed by NATO intelligence. In his speech to the World Economic Forum in Davos, Ukrainian President Petro Poroshenko, asserted on Wednesday that Russia has more than 9,000 troops and over 500 tanks in eastern Ukraine backing separatists in rebel-held areas.

"The significant escalation in hostilities has taken the toll to 5,086 individuals and we fear the real figure may be considerably higher," U.N. human rights spokesman Rupert Colville said on Friday in a press briefing. The months-long conflict in eastern Ukraine has come at the cost of an increasingly high death toll, with a large increase in the numbers of internally displaced people. As the death toll rises each day, and as Russian-backed separatists in east Ukraine vow to fight for more territories, peace seems a long way off. "Attempts to talk about a cease-fire will no longer be undertaken by our side," the separatist leader Alexander Zakharchenko said.