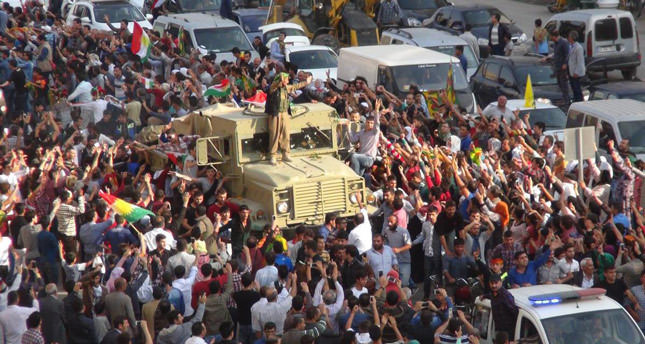 Turkey has long been tackling the Kurdish issue, has recently made progress after launching the reconciliation process and is establishing relations with the KRG. But a conference in Irbil highlighted that the KRG are still obsessed with Turkey’s policies in the 1990s

The Irbil-based Middle East Research Institute (MERI) and the Istanbul-based Al-Sharq Forum organized a conference in Iraq's Irbil on Monday with the attendance of several Iraqi-Kurdish and Turkish academics, bureaucrats and journalists. The title of the conference was "Turkey, Kurds and the Kurdistan Regional Government: Strengthened Partnership in a Region in Turmoil."

The conference consisted of three sessions and covered several topics from the ongoing reconciliation process in Turkey and the cooperation between the Kurdish Regional Government (KRG) and Turkey against the threat posed by the Islamic State of Iraq and al-Sham (ISIS). The participants from Turkey, many of whom were of Kurdish origin, underlined the significance of furthering cooperation not only in economic and security policies, but also in cultural and educational policies, in order to help establish permanent relations.

However, the majority of the participants from the KRG, besides nodding at the Turkish participants' offers for strengthening relations, preferred to emphasize the policies taken by Turkey toward Kurds in the 1990s, and the reasons why Turkey refrained from sending warplanes when ISIS attempted to capture Irbil in August. Interestingly, not one of them mentioned the 49 Turkish hostages, held by ISIS in Mosul, who were released in September, and the fact that immediately after their release, Turkey sent military aid from its base in Dohuk.

The conference started with a warm atmosphere after Galip Dalay, vice-president of the Al-Sharq Forum, and Dlawer Ala'Aldeen, President of MERI, welcomed the guests and gave a brief talk on the importance of the strategic, political and economic cooperation between the KRG and Turkey.

In the 1990s, you could be imprisoned for saying "Kurds are an ethnic group that exist in Turkey." The sentence, a fact, would be considered a threat to the unitary structure of Turkey by the court. The word "Kurdistan" could never be said in public areas, as speaking Kurdish in public was banned, even on visiting days in prisons. However, after the Justice and Development Party (AK Party) took power in 2002, a new era began in Turkey in relation to the Kurdish issue. AK Party cadres had vowed to admit to the Kurdish problem and seek a peaceful resolution, instead of endless and costly military operations in the 1990s. When they occupied high positions in the Turkish state, resolving the Kurdish issue became one of the top priorities.

The reconciliation process was launched in 2009 via destroying taboos in Turkey. Former President Abdullah Gül started talks with the KRG, the PKK and its imprisoned leader Abdullah Öcalan, by using the word "Kurdistan," immediately opening a new chapter. Military operations were stopped, a Kurdish-broadcasting state TV was opened, investment in Kurdish-majority cities was enhanced, and Kurdish parties were saved from being shut down by the constitutional court via an amendment to the constitution. It has become normal to see legal NGOs, political parties and other interest groups that support the Kurdish movement in Turkey.

Besides the changing policies towards the Kurds living in Turkey, there was another policy change regarding the KRG. After the new Iraqi constitution was adopted in 2008, the KRG gained autonomy and started establishing relations with its neighbors independent from the Baghdad administration. Turkey was in trouble with Baghdad due to former Iraqi Prime Minister Nouri Al-Maliki's sectarian policies, from which not only Sunni Arabs but also Kurds suffered. Turkey was eager to improve the economic and political relations with the autonomous KRG, once considered a threat to Turkey's security. Besides the establishment of a consulate in Irbil, several Turkish businessmen made billion-dollar investments in KRG cities and visa procedures were abolished. As a result, KRG President Massoud Barzani and former Prime Minister and current President Recep Tayyip Erdoğan stood arm-in-arm in 2013, in Diyarbakır, the city with the largest Kurdish population in Turkey.

The speeches by participants from the KRG suggested that they were not fully aware of the change in Turkey, and that Turkey as a state makes rational choices. KRG spokesman Safeen Dizayee said Turkey did not recognize the Kurds in the 1990s, and that bad things happened to the Kurds. He asked Turkey to undertake further measures to stop ISIS, without elaborating on how the cooperation against ISIS would be increased.

Presidential Chief of Staff for the KRG, Fouad Hussein, whose speech was entitled "Turkey and KRG relations in the pre- and post-ISIS period," claimed that Turkey persecuted Kurds, denied their existence and attempted to assimilate them, but missed the fact that despite the clashes in the eastern part of Turkey, a Kurdish person could be a government-employee, businessman, politician and even president like Turgut Özal, the eighth president of Turkey. Instead of giving facts about ISIS, he asked why Turkey did not fight ISIS.

Hiwa Osman, a journalist, went further and accused Turkey of helping and provoking ISIS to attack the KRG. He thanked Iran for sending its warplanes against ISIS, but did not even mention the Turkish hostages, or clarify why Turkey had to fight for the KRG. Farhad Alaaldin, chief advisor to the Iraqi president, gave an interesting speech, as he made a brief presentation about Turkish foreign policy. During his talk it was difficult to distinguish whether he was an adviser to the Turkish foreign minister or the Iraqi president. He accused Turkey of interfering in the internal affairs of its neighbors, of following sectarian policies and of prioritizing Turkmens. However, he missed the historic event that saw Turkey receive almost 200,000 refugees from Kobani, northern Syria as well as thousands of Yazidis who fled from northern Iraq. Contrastingly, at the end of his talk, he asked Turkey to play the referee role between Baghdad and Irbil in order to solve ongoing disputes.

The participants from Turkey were relatively calm and attempted to explain the need for increasing cooperation with the KRG and the reasons behind Turkey's policies. Vahab Coşkun, professor at Dicle University in Diyarbakır, said that the ISIS threat has created an awareness of Kurdish identity since the Kurds in Iraq, Turkey and Syria have spoken out against the threat and the KRG sent Peshmerga forces to help Syrian Kurds.

Hatem Ete, chief advisor to the Turkish prime minister, said Turkey has made significant progress in the reconciliation process and for bettering relations with the KRG. "Turkish society has been informed about the Kurdish question and the majority of Turkish people have changed their view on the issue. The idea that steps must be taken to solve the problem regarding Kurdsish demands has been normalized in society. Turkish media has changed its rhetoric. For instance the epithet "baby killer," used once to describe Abdullah Öcalan, has been forgotten. However, PKK and pro-PKK groups have not been happy with the steps taken so far and demanded more. The pro-PKK media has not even changed its language. The pro-PKK groups attacked police and people when Kobani was under siege," Ete said.

Adviser to the prime minister and Vice President of the Strategic Research Institute, Mesut Özcan, underlined the significance of Iraq's economic relationship with Turkey. Iraq has always been a market for Turkey, even in the 1980s, he said. "Turkey had to address Baghdad relations before the new Iraqi constitution was adopted. However, after the new constitution recognized the KRG as an autonomous region, Turkey also established relations with the KRG. The wrong policies of Baghdad brought Irbil and Ankara closer. But Ankara could never have excluded Baghdad from the balance. The rapidly growing relations with Irbil raised the idea that the only ally of Turkey in Iraq was the KRG, and that is why Kurds expected Turkey to send warplanes against ISIS," he said.

He also responded to the claim that Turkey only wants to see the KRG enjoy a growing economy and said, "It is a fact that Turkey has been prioritizing economic relations with the KRG. But this is not proper for the relations with the KRG. This is the path Turkey is pursuing in its new foreign policy. In recent decades, security was the first priority, but now the economy plays a bigger role."

It was apparent that the Kurdish side was hesitant toward Turkey, but was dazzled by Iranian aid against ISIS. However, they have ignored the fact that Turkey's choices and decisions are also based on a domestic balance. Although happy to denounce Turkey's policies in the 1990s, and in the present-day, none of them addressed the unchanging policies of the PKK. While favoring their close relations with Iran and reminding Turkey of its security policies in the 1990s on every occasion, no one brought up the situation of the Kurds living in Iran.