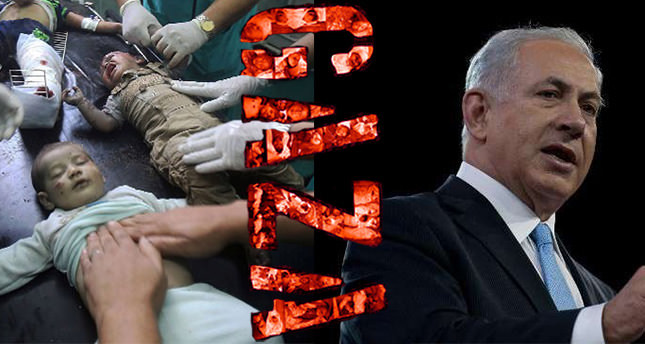 by Daily Sabah Jan 28, 2015 12:00 am
Israeli PM Benjamin Netanyahu threatened to take military action along the country's northern border, saying Israel's enemies in the north would face a fate similar to people of Gaza after missiles fired from Lebanon struck an Israeli military convoy on Wednesday.

Reminding Israel's onslaught against the Gaza Strip that lasted for 51 day during last summer, Netanyahu said "To anyone who is trying to challenge us on the northern border I suggest looking at what happened here, not far from the city of Sderot, in the Gaza Strip."

Last summer, Israel launched a fierce military onslaught against the Gaza Strip that lasted for 51 days, with the stated aim of halting rocket fire from the coastal strip.

By the time the offensive ended on Aug. 26, more than 2,160 Gazans had been killed-mostly civilians-and some 11,000 injured.

At least two IDF soldiers were killed and seven others were injured in the Shebaa Farms region on Wednesday when their vehicle was struck by anti-tank missiles fired from southern Lebanon.