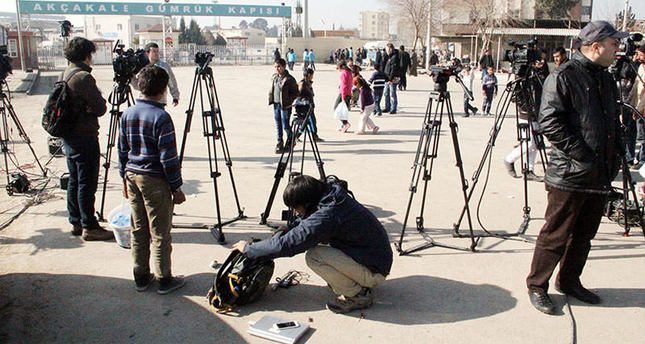 by Compiled from Wire Services Jan 29, 2015 12:00 am
An audio message purportedly from a Japanese journalist held by Islamic State of Iraq and al-Sham (ISIS) militants said a Jordanian air force pilot also captured by the group would be killed unless a woman jailed in Jordan was released by sunset on Thursday.

The message appeared to postpone a previous deadline set on Tuesday in which the journalist, Kenji Goto, said he would be killed within 24 hours if the Iraqi would-be suicide bomber in prison in Jordan was not freed.

The message said the hostage swap would happen at the Turkish border by Thursday sunset 29th of January Mosul time. A group of journalists, many of whom are Japanese, have been waiting at Turkey's Akçakale border gate – a border crossing with Syria – since yesterday.

The latest audio recording, which could not be verified by Reuters, was posted on YouTube early on Thursday. Japanese Chief Cabinet Secretary Yoshihide Suga told a news conference that the chances were high it was Goto's voice in the recording.

"I am Kenji Goto. This is a voice message I've been told to send to you. If Sajida al-Rishawi is not ready for exchange for my life at the Turkish border by Thursday sunset 29th of January Mosul (Iraq) time, the Jordanian pilot Muath al-Kasaesbeh will be killed immediately," the voice in the recording says.

Jordan said on Wednesday it had received no assurance that al-Kasaesbeh was safe and that it would go ahead with a proposed prisoner swap only if he was freed. On Thursday, it made another statement, saying it will not free the Iraqi prisoner al-Rishawi without proof that the pilot is still alive.

Jordanian government spokesman Mohammed al-Momani said Thursday afternoon, "We want to see a proof of life of the Jordanian pilot and then we can talk about the exchange."

The new audio message implied that the Jordanian pilot would not be part of an exchange deal, indicating any swap would be between Goto, a veteran war reporter, and al-Rishawi.

That leaves Jordan in a difficult position. Any swap that left out the pilot would be deeply unpopular after officials insisted he was their priority, and could leave Amman subject to further demands from the militants.

But refusing the insurgents' ultimatum could heighten domestic opposition to Jordan's unpopular role in the U.S.-led military campaign against ISIS.

Protests have already erupted in Karak, hometown of the pilot, who is from an important Jordanian tribe that forms the backbone of support for the Hashemite monarchy.

There was no immediate comment from the Jordanian government, but a security official said authorities were trying to verify the authenticity of the recording and were coordinating with their Japanese counterparts.

On Tuesday, a video was released purporting to show Goto saying he had 24 hours to live unless Jordan released al-Rishawi, on death row for her role in a 2005 suicide bomb attack that killed 60 people in the capital Amman.

Jordanian government spokesman Mohammad al-Momani said on Wednesday that Jordan was ready to release al-Rishawi if Kasaesbeh was spared, but made clear that she would be held until the pilot was freed.

Kasaesbeh was captured after his jet crashed in northeastern Syria in December during a bombing mission against ISIS, which has captured large tracts of Syria and Iraq.

The hostage crisis is the biggest diplomatic test for Japanese Prime Minister Shinzo Abe since he took office in 2012 pledging to play a bigger role in global security.

The Jordanian comments raised concerns in Japan that Goto might no longer be part of any deal between Amman and ISIS. But CNN quoted Jordanian Foreign Minister Nasser Judeh as saying that Goto's release would be part of any exchange.

"Kenji has done nothing wrong," Goto's mother, Junko Ishido, told reporters. "I hope he comes home safely, that's my only feeling as a mother."

Abe said the government was making every effort to ensure Goto's early release.

He reiterated that Japan would not give in to terrorism and Tokyo would keep cooperating with the international community.

"If we are too afraid of terrorism and give in to it, this will give rise to fresh terrorism against Japanese and it will become a world in which the will to carry out despicable violence has its own way," Abe told parliament. "Such a thing is totally impermissible."

The hostage crisis erupted after Abe, while on a tour of the Middle East, announced $200 million in non-military aid for countries contending with ISIS, but his government has rejected any suggestion it acted rashly and stressed the assistance was humanitarian.

Goto went to Syria in late October. According to friends and business associates, he was attempting to secure the release of Haruna Yukawa, his friend and fellow Japanese citizen who was captured by ISIS in August.

In the first video purportedly of Goto, released last week, a black-clad masked figure with a knife said Goto and Yukawa would be killed within 72 hours if Japan did not pay ISIS $200 million.