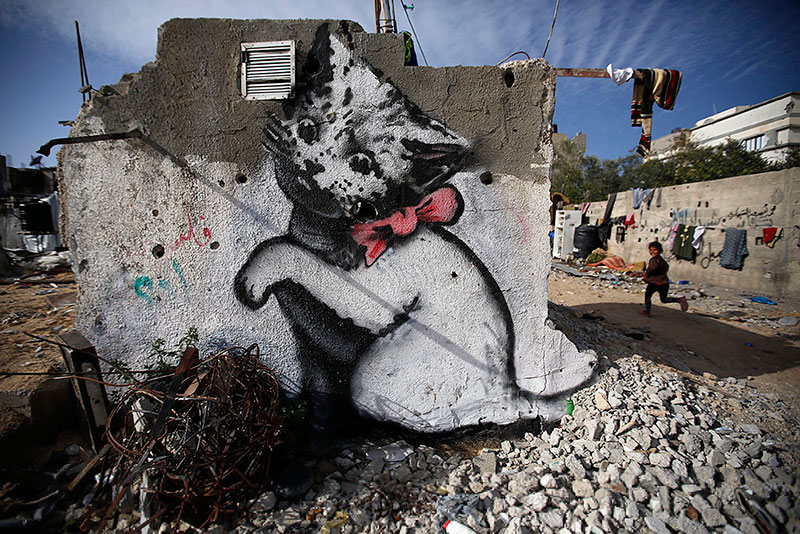 by Associated Press Mar 04, 2015 12:00 am
The work of mysterious British graffiti artist Banksy has made an appearance in the Gaza Strip.

In a short film posted on his website, the popular street artist appears to have sneaked into Gaza through an underground tunnel from Egypt. The video combines footage from the Israeli-Hamas war last summer, with political commentary about the coastal strip's misery.

Some of Banksy's work is seen as well, such as a drawing of a playful kitten, children swinging from what looks like a black watchtower and a Greek goddess cowering against a remaining concrete slab of a destroyed structure.


The video ends with the following message on a wall in Gaza: "If we wash our hands of the conflict between the powerful and the powerless we side with the powerful we don't remain neutral."

Banksy publicist Jo Brooks confirmed on Friday that he visited Gaza, getting there through a tunnel. Brooks would not say when the visit took place.

Local residents were skeptical about this account since Egypt has stepped up its military campaign against the tunnels and destroyed most of them after last summer's war.

Mohammed Shenbary, 29, said a Western artist arrived with a Palestinian translator about three months ago and started painting on the remaining wall of his battered home in Beit Hanoun, in the northern Gaza Strip. He said the man looked to be in his mid-30s and painted the kitten in about a half hour.

"He asked me not to remove the wall and to maintain the painting," Shenbary said, adding that the now-famous graffiti has had little impact on his life.

Jamal Abu Eitta, a 60-year-old, on whose home there is a graffiti depicting a watchtower, was equally unimpressed. 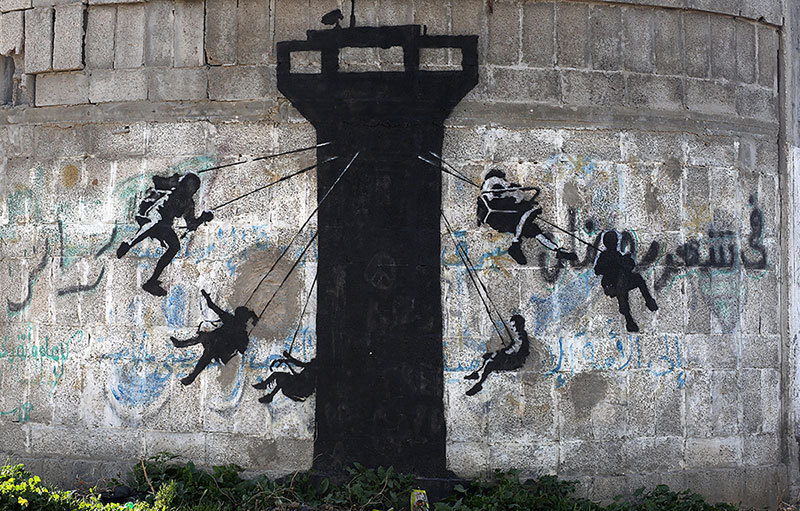 "We don't care about it. Gaza streets are full of posters, graffiti and drawings," he said.

It's not Banksy first foray into the Mideast conflict. He previously drew a painting of a girl pulled upward by balloons on Israel's West Bank separation barrier.