Israeli Arab parties unite for first time ahead of elections 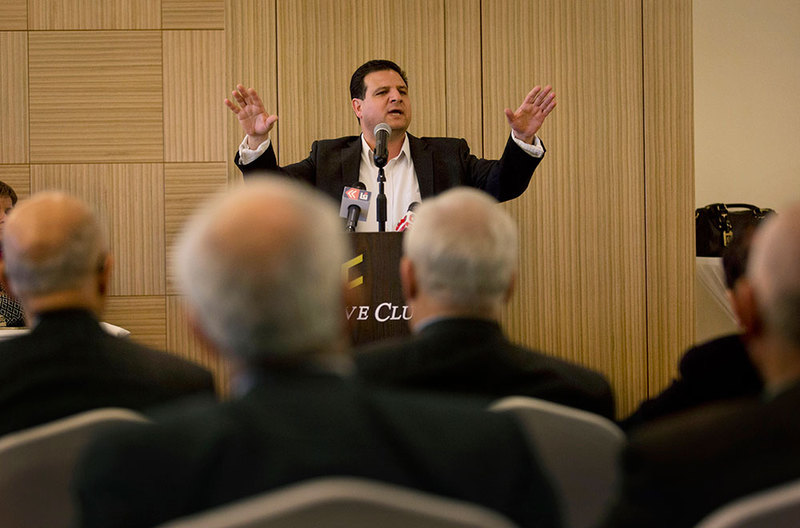 by Mar 09, 2015 12:00 am
A political sideshow for much of the past six decades, Israel's Arab minority is hoping to gain much-needed muscle after next week's parliamentary election, with four Arab parties uniting under one banner for the first time.

Surveys show the Joint Arab List could even finish third in the vote and become a factor in the coalition-building that dominates Israeli politics, where no party has ever won a parliament majority.

Many in the Arab community, which makes up twenty percent of Israel's eight million population, see the new found unity as a breakthrough in battling discrimination and gaining recognition. Though they have full and equal rights, Arab Israelis often say they are treated as second-class citizens.

"We've been waiting for this for decades," said Mirna Baransi, 24, a student from Nazareth. "We'll have more power now to make a difference."

Israeli Arabs are descendants of residents who stayed put during the 1948 war of Israel's founding, in which hundreds of thousands of fellow Palestinians fled or were forced to leave their homes, ending up in Jordan, Lebanon and Syria as well as in Gaza, the West Bank and East Jerusalem.

Those who remained have long pointed to inferior services and unfair allocations for education, health and housing. More than half of the Arabs in Israel live below the poverty line.

In Umm el-Fahm, an Arab Israeli town of 48,000 that borders the northern part of the occupied West Bank, signs urging residents to vote for the Joint Arab List have been pinned along the main road that winds up into the hills.

A blue and grey party banner - "One cause, one vote" - hangs at the town's entrance. Nearby, a mosque minaret overlooks the golden arches of a McDonald's and memorials commemorate thirteen local youths killed by Israeli police in 2000 while demonstrating in solidarity with a Palestinian uprising.

Khitam Mahmis, 46, said she has never before voted in an election, but this time she will. "Life is getting worse for the Arabs here. If we go to the ballot with more people, then we will get more," she said.

Arab parties have never been included in any Israeli government, nor have they sought membership. That is unlikely to change now - but the Joint Arab list could still have a big role to play after the votes are counted.

The Arab parties have traditionally won around eleven seats in the 120-seat Knesset. As a joint list, opinion polls predict, they could win thirteen, while their internal projections suggest this could even rise to fifteen, putting the group a clear third.

In Israel's parliamentary election system, voters choose parties rather than individual candidates, and the head of the party with the most political allies will usually win a presidential mandate to try to form a government.

Ayman Odeh, head of the Joint Arab List, has hinted that the faction may back Isaac Herzog, whose center-left Zionist Union is running neck-in-neck with Prime Minister Benjamin Netanyahu's right-wing Likud before the March 17 vote.

In such a tight race, every seat is crucial.

"We want this government which led all of us, Jews and Arabs, to a dead end, not to continue," Odeh told Reuters. "But we are not in Herzog's pocket."

Some of Odeh's partners are unlikely to recommend any candidate as prime minister, but if Herzog gets the job, the Joint Arab List could lend essential outside backing. That has happened in the past, with Arab lawmakers supporters of late Prime Minister Yitzhak Rabin, who struck a peace deal with the Palestinians in 1993.

"We had a successful formula in the '90s with the Rabin government," Odeh said, indicating he was seeking a similar arrangement. "We united those marginalized and threatened, and we seek partnership with Jews too."

Arab voter turnout in the 2013 election was 57 percent, lower than the 68 percent national average. But Tamar Hermann of the Israel Democracy Institute said the number could rise.

Arab citizens make up about 15 percent of eligible voters, which means they have an electoral potential of 18 seats. Some vote for non-Arab parties.

In a possible political twist, if Herzog and Netanyahu end up equal and form a "grand coalition" together - as pollsters are starting to predict - Odeh's list would withhold its support and become the official opposition, a first for an Arab party in Israel's history.

Odeh, 40, is not well-known outside the Arab community, but he drew attention during a TV debate in which he kept his cool when far-right Foreign Minister Avigdor Lieberman accused him of representing "terrorist organizations" in the Knesset.