Egypt rakes billions in Gulf aid that boosts its president 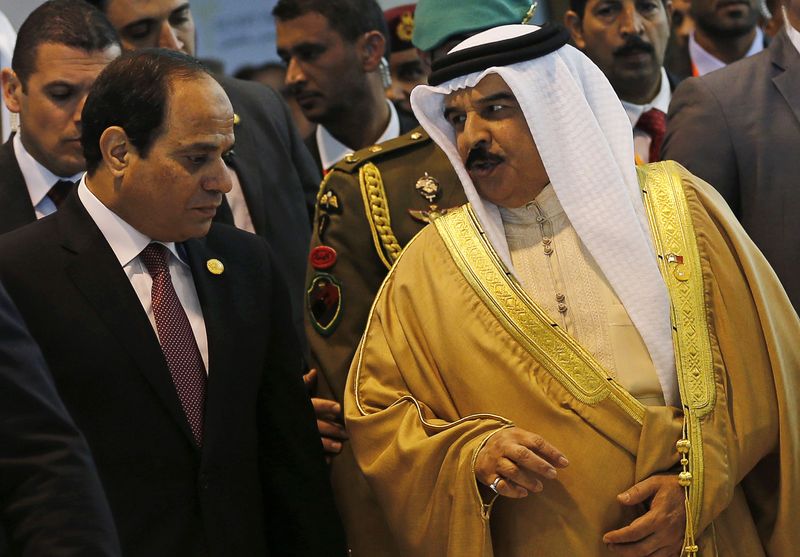 by Associated Press Mar 13, 2015 12:00 am
Egypt raked in promises of more than $12 billion in investment and aid from its Gulf Arab allies on Friday, kicking off an international conference aimed at rescuing the country's gutted economy and giving a political boost to its soldier-turned-president.

The three-day gathering in the Sinai resort of Sharm el-Sheikh is meant to show the world Egypt is open for business again to draw investors after four years of instability and turmoil that followed the 2011 Arab Spring uprising that ousted longtime autocrat Hosni Mubarak.

President Abdel-Fattah el-Sissi made his case for the world's support, depicting Egypt as vital to regional stability.

"Egypt has and will always be the first line of defense against the dangers faced by the region," el-Sissi, wearing a dark suit and a purple tie, said to one of many rounds of applause that interrupted his 26-minute address. Some 1,500 delegates from more than 50 nations were in attendance.

The gathering of royals, heads of state, top international officials and businessmen was also an opportunity for el-Sissi to put behind him criticism over the military's 2013 ouster of Egypt's elected president Mohammed Morsi.

Since the ouster which was led by el-Sissi, then head of the military the government has cracked down hard on Morsi's Muslim Brotherhood, with hundreds killed and thousands imprisoned. It has also targeted secular and liberal activists.

U.S. Secretary of State John Kerry, addressing the conference, made a strong show of support for Egypt, with only a glancing reference to rights concerns and a call for more transparency.

"This part of the world is blessed with a stunning amount of commercial potential," Kerry said at an American Chamber of Commerce event prior to the opening of the conference.

The U.S., however, still cannot restore hundreds of millions of dollars in suspended military aid to Egypt, as el-Sissi has sought, because the Obama administration is undecided about whether to affirm Egypt's progress on democracy and human rights or issue a national security waiver. It must do one or other under the 2015 federal budget to unblock the aid.

El-Sissi outlined to delegates his economic recovery plan, saying he wanted to see at least six percent annual GDP growth within the next five years, up from around 2 percent currently, and reduce unemployment from its current 13 percent to about 10 percent. He also promised fair taxation and lower inflation.

The conference opening saw a swift series of pledges from Saudi Arabia, Kuwait and the United Arab Emirates, continuing a flood of some $30 billion in largesse they have provided since el-Sissi led the ouster of Morsi, keeping the economy afloat.

Kuwait's Emir Sheikh Sabah Al Ahmad Al Sabah announced that his oil-rich nation would invest $4 billion in Egypt. Next at the podium was the crown prince of Saudi Arabia, Prince Muqrin, who announced another $4 billion in aid to Egypt.

Another $4 billion in aid and investments came from the United Arab Emirates.

"To stand by Egypt is to breathe life into the future of the (Arab) nation," the UAE's prime minister and ruler of Dubai, Sheikh Mohammed bin Rashid Al Maktoum, told the assembly.

Oman also pledged $500 million, half aid and half investment, over the next five years.

The cash gives Egypt much-needed breathing room while it grapples with its economic woes, like costly state subsidies, an ailing tourism sector and fiscal deficits.

The aid "gives comfort" to investors over the government's foreign currency reserves "until the current account issues start resolving themselves," Hisham el-Khazindar, co-founder of Al-Qalaa Holdings, one of Egypt's largest investment companies, told the AP.

But the crucial question from the conference will be whether Egypt can convince investors who fled the chaos since 2011 to return so it can move off the largesse from Arab petro-giants.

At the gathering, Egyptian officials are putting forward a menu of projects including a plan to develop industrial zones around the Suez Canal. Also announced was an ambitious project to build an entirely new capital for the country, adjacent to Cairo, to relieve congestion in the metropolis of around 18 million people.

Italian Prime Minister Matteo Renzi spoke of his country's shared responsibility with Egypt over the security of the Mediterranean. The prime minister of Ethiopia, with which Egypt is in a dispute over sharing the waters of the Nile River, spoke of the common goals of the two countries.

Also present at the opening session was Sudanese President Omar al-Bashir, who has arrest warrants against him from The Hague-based International Criminal Court for a series of crimes, including genocide in his country's western Darfur province.

Al-Bashir addressed the conference, calling for fellow Arab nations to invest in food production in his vast country which lies across Egypt's southern borders.


"Egypt offers an example of Arab and Islamic civilization, a nation that abhors violence, terrorism and militancy, a nation that reinforces regional stability and security and respects its neighbors," he said, ending his speech with his trademark slogan, "Long live Egypt."

Lately, militants have shifted focus to a campaign of small bombings targeting local and foreign business interests in Cairo and other cities. Among those targets were branches of an American fast food chain, a branch of an Emirati bank and a branch of Carrefour, the French supermarket chain, as well as the two foreign mobile phone companies, the Emirati Etesalat and France's Mobinil.
Last Update: Mar 13, 2015 10:33 pm
RELATED TOPICS