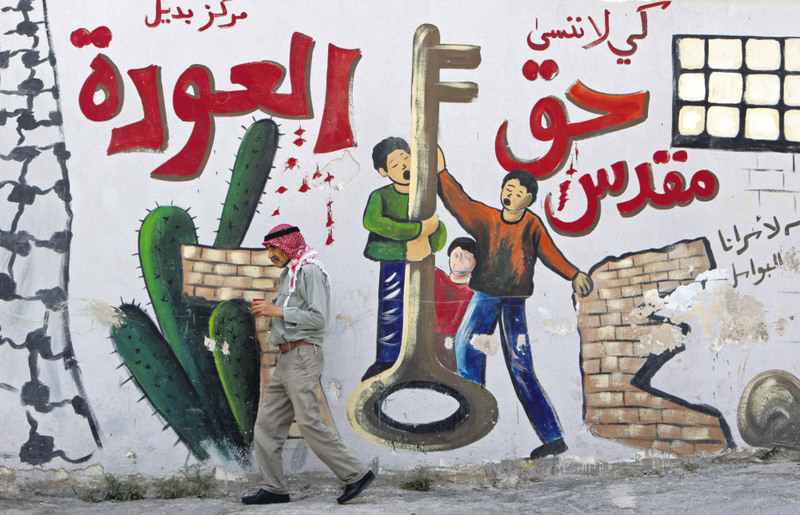 The Jenin refugee camp, which was established in 1953, still holds 16,000 registered refugees and is a place that explicitly shows the pains from which Palestinians suffer. Turkey continues to side with these displaced people by delivering various aid materials

The Israeli-Palestinian conflict is always crucial to the Turkish foreign policy agenda. Especially Gaza and Jerusalem, as the two main encounters of Israeli violence and occupation, are publicly known and supported. Nongovernmental organizations, aid agencies and the Turkish Cooperation and Coordination Agency (TİKA) are quite active in Gaza for medical treatment, material support, reconstruction of houses and political support for the resistance of people who are forced to live in what has become an open-air prison.

President Recep Tayyip Erdoğan and Prime Minister Ahmet Davutoğlu are two primary figures in world politics that profoundly support Palestinians and defend their rights in the international area. The "one-minute" incident in Davos, which was Erdoğan's harsh response to former Israeli President Shimon Peres's accusations of Palestinians committing terrorism, still has an effect on Middle Eastern society. While walking in the street, "one-minute" is the first thing that we heard if they knew that we were from Turkey. Although Palestine has fraternal loyalty from Turkish people, the social and political situations in the West Bank and in the refugee camps are not known in detail. However, in these parts of Palestinian society there is ongoing resistance to occupation, and there were significant violent attacks by Israel in recent history.

Palestinians are one of the largest refugee populations in the world. Today, the total Palestinian refugee population is estimated at 7.4 million. In Palestinian territories, after the establishment of the state of Israel, numerous refugee camps were set up due to the systematic expulsion and dispossession of thousands of Palestinians. In addition to the refugee camps in neighboring Arab states such as Jordan, Lebanon, Egypt and Syria, the West Bank has a very large number of refugees from the 1948 borders.

The Jenin refugee camp was established by refugees who came from Haifa and its nearby villages in 1953. It currently sits on 420,000 square meters in Jenin in the northern West Bank. According to statistics from the United Nations Relief and Work Agency (UNRWA), it still has 16,000 registered refugees. Although the UNRWA provides the camp with some basic services such as health, education, relief and social services, job creation programs and emergency food, it continues to suffer from overcrowded schools, high unemployment rates and massive destruction due to the second intifada.

In very recent history, the camp was exposed to a very cruel "massacre." Even though the UN reported it as an "excessive use of force" by Israel, the type of attack, the means used for the killing of civilians, the total destruction of houses and infrastructure and Israel's attitude after the attack deserve to be evaluated more closely. On April 3, 2002, the Israeli military began to hit the camp with missiles and then totally crushed the camp with tanks and bulldozers. It was not new, but Israel did not protect the civilian population and prevented access to humanitarian relief services for 12 days.

In April 8, 2002, former Israeli Prime Minister Ariel Sharon gave a speech in the Knesset concerning the reason for the operation in the West Bank, especially Jenin: "IDF [Israeli Defense Forces] soldiers and officers have been given clear orders to enter cities and villages that have become havens for terrorists; to catch and arrest terrorists and, primarily, their dispatchers and those who finance and support them; to confiscate weapons intended to be used against Israeli citizens; and to expose and destroy terrorist facilities and explosives, laboratories, weapons production factories and secret installations. The orders are clear: target and paralyze anyone who takes up weapons and tries to oppose our troops, resists them or endangers them – and avoid harming the civilian population."

To analyze Sharon's speech and compare its relation to the real situation, we must move forward in the story. Initially, although Sharon introduced the operation as a cleaning of the West Bank of terrorists, when we look at academics' views on the operation, the strategic reasons behind the operation is clear. According to Professor Stephen Graham, by means of Operation Defense Shield, Sharon aimed to "destroy the urban, civil and infrastructural foundations of the proto-Palestinian state." What does it mean? The main purpose of Sharon's "urbicide" strategy was "to deny the Palestinian people their collective, individual and cultural rights to the city-based modernity long enjoyed by Israelis." This is how Israel destroyed developing Palestinian infrastructure.

A psychologist, Sylvie Mansour defined the situation of the camp after the siege: "It is obvious that there was no fighting here, only a determination to destroy whatever might be useful." This quotation from her is the general view of the aftermath of the massacre. People could not know where the bodies of their missing relatives were, whether they were in an Israeli prison, dead under a pile of rubble or buried by Israeli soldiers in an unknown place. After the siege, 16 people were found alive under the rubble, according to Mansour's report. Bulldozing, sniper fire and bombing were the three main methods the IDF used in the camp, and the debris from the assault showed this. In all aspects, it was a sum of practices of human rights violations. Even though the UNRWA played the biggest role in the rebuilding of the Jenin refugee camp, its services have generally stayed to meet basic needs of the refugees and not their overlapping rights to provide real freedom in the future.

The main Israeli critics that judge the refugee camps as a source of suicide bombers and political movements do not find meaning in these conditions. When we interviewed Jamal al-Shati, who was also head of the Committee for Refugees in the Legislative Council and elected as a member of the Fateh Revolutionary Council at the 2009 Fateh Conference, he said that people in the refugee camps lost what they had and left behind their good and happy lives. Hence, Shati said that according to refugees' point of view, the only solution is to resist the occupation and to protect what they have and their homes, and that is being a part of a political movement. The battle of Jenin was an unprecedented case of resistance even the most professional military forces could not stand. That is why Shati highlighted that before the Iraq war of 2003 the U.S. military came to Jenin to receive a small briefing from Israeli military officials on dealing with guerilla warfare.

By March 1, the anniversary of the battle of Jenin started. Jenin is not only prominent due to resistance by the civilians of the camp, but also its history in the Ottoman period. The refugee camp is near the Hijaz railroad station for Jenin, and there are schools and mosques – one of them is the famous one of the city constructed in the Ottoman era. TİKA is sponsoring a school construction project, and Jenin also has an industrial zone in cooperation with the Union of Chambers and Commodity Exchanges of Turkey (TOBB), the Turkish Ministry of Science Industry and Technology and the Palestinian Authority. Turkey's historical roots, humanitarian aid and assistance by TİKA are the main motivations that are leading to better and closer relations. The Middle East has hosted such conflict zones with humanitarian crises and a challenged peace-building process for a long time. Turkey, as a supporter of democratic and peaceful regimes in the region, is always in a leading position for these zones requiring immediate strategic and rational assistance.
Last Update: Mar 14, 2015 2:19 am
RELATED TOPICS