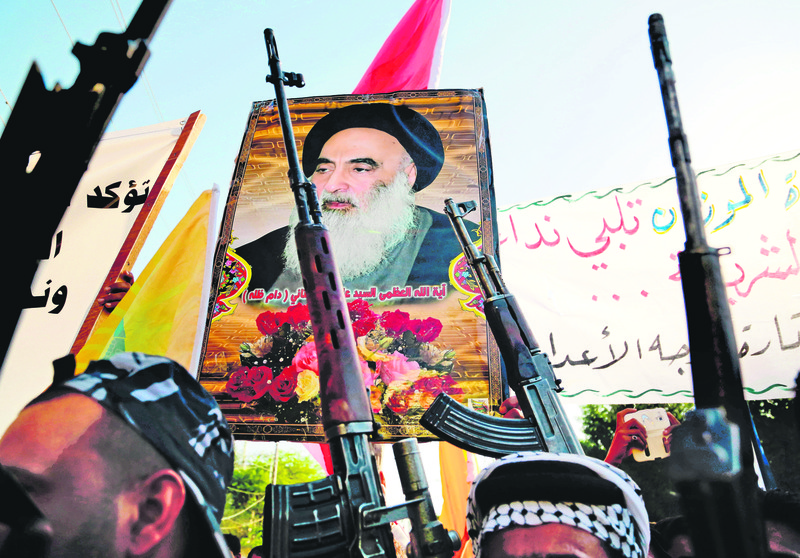 The Iran-backed Iraqi forces along with Shiite militias fight Islamic State of Iraq and al-Sham (ISIS) militants to recapture Tikrit. Some 30,000 men have been involved in the operation to recapture Tikrit, one of ISIS's main hubs since they overran large parts of Iraq nine months ago. The overt Iranian role and the prominence of Shiite militias in the campaign have raised fears of possible sectarian cleansing should Tikrit, an overwhelmingly Sunni city, fall to the government troops. The U.S. and Human Rights Watch (HRW) warned an offensive to retake control of the Iraqi city of Tikrit must not fuel sectarian tensions.

The same warning was made before the Shiite militias entered Amerli to 'liberate' the civilians from ISIS. However a recently released HRW report revealed that the militias looted, burned thousands of buildings, and abducted dozens of people. "After US air strikes and Iraqi fighters broke the siege [of Amerli], pro-government militias began to raid Sunni and mixed Sunni villages in the areas surrounding Amerli," HRW stated in the report. "They [Shiite militias] raided and looted residential and commercial properties, later burning down or blowing up thousands of buildings in more than 30 villages" in Salahaddin province, the reported continued.

The organization was able document that at least 3,200 building were torched after the militias seized the town on September. The Shiite militias bombed and destructed the Sunni civilians' homes in October, November and December. "The widespread burning of civilian homes by the militia groups in areas under their control appeared to have had no clear military objective and to represent collective punishment against residents of local Sunni villages," HRW stated. Kata'ib Hezbollah (Hezbollah Brigades), Asiab al Haq (League of the Righteous), Saraya Khorasani (Khorasan Brigades), and the Badr Organization were involved in the operation. Each of these militias, which operate under the aegis of the Popular Mobilization Committee, or Hashid Shaabi, have very close relations with Qasem Soleimani, the shadowy commander of the Quds Force, an elite branch of the Iranian Revolutionary Guard. "There is no way back for Sunnis, we will destroy their homes," a Hezbollah Brigades commander in Amerli who is known as Abu Abdullah told Reuters in mid-September 2014.

HRW said the report documents, through field visits, analysis of satellite imagery, interviews with victims and witnesses, and review of photo and video evidence, that militias looted property of Sunni civilians who had fled fighting, burned their homes and businesses, and destroyed at least two entire villages. "Iraq can't win the fight against ISIS's atrocities with attacks on civilians that violate the laws of war and fly in the face of human decency. Militia abuses are wreaking havoc among some of Iraq's most vulnerable people and exacerbating sectarian hostilities," said Joe Stork, deputy Middle East and North Africa director. "Following the operations to end the Amerli siege, pro-government militias and volunteer fighters as well as Iraqi security forces raided Sunni villages and neighborhoods around Amerli in Salah al-Din and Kirkuk provinces. Many were villages that ISIS had passed through and in some cases used as bases for their attack on Amerli. During the raids, militiamen, volunteer fighters and Iraqi security forces looted possessions of civilians who fled fighting during the onslaught on Amerli; burned homes and businesses of the villages' Sunni residents; and used explosives and heavy equipment to destroy individual buildings or entire villages," the report said. "Through satellite imagery analysis Human Rights Watch confirmed building destruction in 30 out of 35 villages examined in a 500 kilometer square area around Amerli. Human Rights Watch was not able to visit all of these locations and assess all villages in the area, but conducted on-site investigations in four villages, and documented details of the militia destruction of 14 villages on the basis of witness accounts," the report stated.

In a previously released report HRW said that "Abuses by militias allied with Iraqi security forces in Sunni areas have escalated in recent months. Residents have been forced from their homes, kidnapped, and in some cases summarily executed." At least 3,000 people have fled their homes in the Muqdadiyya area of Diyala province since June 2014 and, since October, been prevented from returning. In addition to the events documented here, Human Rights Watch is conducting an investigation into more recent allegations that militia and SWAT forces killed 72 civilians in the town of Barwana, also in Muqdadiyya," the report said. The report also underlines that many have been abducted and dozens of families lost contact with their relatives.

In a previous report released on last October by Amnesty International, which covers human rights violations in more than 150 countries it was claimed that the Iraqi government is largely responsible for the attacks on the civilians since the militias target Sunni Iraqis deliberately, as a response to the ISIS attacks, despite there being no concrete evidence that links ISIS and unarmed Sunnis. The report said "In recent months, Shi'a militias have been abducting and killing Sunni civilian men in Baghdad and around the country. These militias, often armed and backed by the government of Iraq, continue to operate with varying degrees of cooperation from government forces – ranging from tacit consent to coordinated, or even joint, operations. For these reasons, Amnesty International holds the government of Iraq largely responsible for the serious human rights abuses, including war crimes, committed by these militias."
Last Update: Mar 21, 2015 12:26 pm
RELATED TOPICS