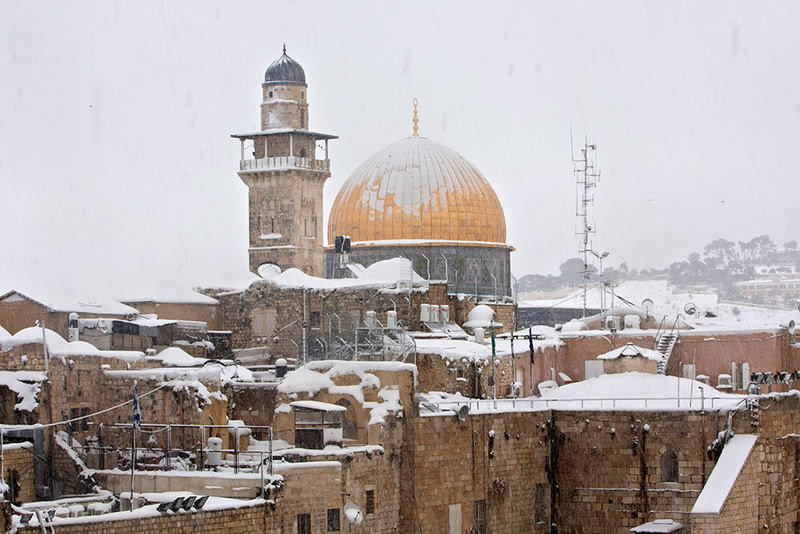 The Dome of the Rock Mosque (Qubbat As-Sakhrah) is seen covered in snow located in the Al-Aqsa compound in old city of Jerusalem | Photo: AP
by Anadolu Agency Mar 22, 2015 12:00 am
Dozens of Jewish settlers on Sunday stormed the East Jerusalem's flashpoint Al-Aqsa Mosque compound under the protection of Israeli police, a Palestinian official said.

"A total of 132 Jewish settlers under the protection of Israeli police forced their way into Al-Aqsa complex through Al-Magharbeh and Hotta gates," General Director of Muslim Endowments and Al-Aqsa Affairs Sheikh Azzam al-Khatib told The Anadolu Agency.

"A group of 10 settlers mounted on the roof of the Dome of the Rock Mosque and tried to perform Talmudic rituals but Palestinian guards managed to prevent them," al-Khatib stated.

Others toured the holy compound passing by Al-Qibali and Al-Marwani mosques before leaving the complex through Al-Silsileh gate, he added.

Outside the compound, he said, a group of Jewish settlers attacked three Muslim women and tried to pour hot tea on them.

Israel occupied East Jerusalem during the 1967 Middle East War. It later annexed the holy city in 1980, claiming it as the capital of the self-proclaimed Jewish state, a move never recognized by the international community.

In September 2000, a visit to the site by former Israeli Prime Minister Ariel Sharon sparked a popular uprising against the Israeli occupation, what later became known as the "Second Intifada", in which thousands of Palestinians were killed.