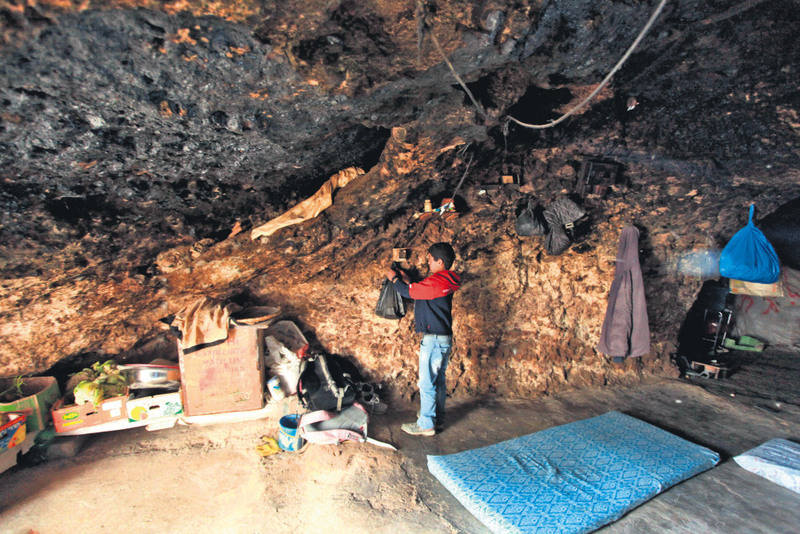 by Anadolu Agency Mar 22, 2015 12:00 am
Scores of Palestinians in the occupied West Bank have made homes out of mountain caves on the outskirts of Al-Khalil (Hebron) city, as Israel continues to prevent them from building homes on territories earmarked for Jewish-only settlements. "We have tried to build homes with bricks and cement, but the Israeli occupation authorities have repeatedly demolished what we manage to build on claims that the structures were built illegally," Noaman Hamamda, 57, told The Anadolu Agency.

Hamamda and his 13-member family currently live in a cave no larger than 30 square meters without any basic amenities. However, he and other Palestinians in the area say they would rather suffer harsh living conditions in the caves than abandon their ancestral land to Israeli settlement projects. "The occupation keeps trying to evict us, but we refuse to give up the land," Hamamda said while his wife Rasmiya prepared tea with primitive utensils. "Life is hard for us here, but you get used to it," he asserted. The family's cave is split into three sections: one for sleeping, another for storing grain, and a third for receiving guests. Outside the cave is a wood oven that Rasmiya uses for cooking and baking bread. "We live a primitive life, but we endure it for the sake of protecting our land," she said. Hamamda's family is one of about 15 Palestinian families living in caves in Al-Khalil's mountainous Al-Mafqara village, one of a cluster of Palestinian villages nestled between five affluent Jewish-only settlements built by Israel on confiscated Palestinian land.

Israeli troops have repeatedly entered the area in force in recent years, demolishing structures built by Palestinian residents on claims that they are illegal. The latest raid by Israeli forces on Al-Mafqara was in 2013, when Israeli bulldozers destroyed an electricity generator that had provided residents with power for a few hours each night. During the raid, Israeli forces also leveled a local mosque. "I can't watch television anymore because Israel destroyed the electricity generator," said 11-year-old Adam, Hamamda's youngest son. Adam said that he and his friends in Al-Mafqara must walk three kilometers every day to reach their school in a nearby town. "When I come back from school, I either tend to the cattle or play with my friends," Adam said. He said he and his friends faced repeated assaults by Jewish settlers in the area. "Sometimes they chase us. If they catch us, they beat us," said the boy.

The ill-fated villages fall within "Area C," which accounts for nearly two thirds of the West Bank's total territory and which remains under "full Israeli security and civilian control," according to the U.S.-sponsored Oslo Accords. The accords, signed between Israel and the Palestinian Authority in 1993 and 1995, divided the West Bank into Areas A, B and C. Israel typically prevents Palestinians in Area C from erecting structures on grounds that the land falls under "Israeli administration." "Scores of Palestinian families in Al-Mafqara and surrounding areas live without basic facilities like water and electricity and have to use animals for transport," Rateb al-Jobour, coordinator of Al-Khalil's popular resistance committees, told AA. "The [Israeli] occupation is relentlessly trying to force residents from the land so it can be used for expanding [Jewish] settlements," he said. Al-Jobour said that some 50,000 square kilometers of land in Al-Khalil were threatened with confiscation by Israel for building additional settlement units or military training camps. He said Jewish settlers living near the villages routinely assaulted Palestinian residents. "Settlers frequently attack women and children from the villages," he said. "They also routinely cut down trees and poison cattle."

Two months ago, Peace Now, a left-leaning Israeli NGO, said the Israeli government had issued tenders for 450 new settlement units to be built in the occupied West Bank. International law considers the West Bank and East Jerusalem occupied territories captured by Israel in 1967, deeming all Jewish settlement building on the land to be illegal. Palestinian negotiators insist that Israeli settlement building must stop before stalled peace talks can resume.
Last Update: Mar 23, 2015 9:46 am
RELATED TOPICS