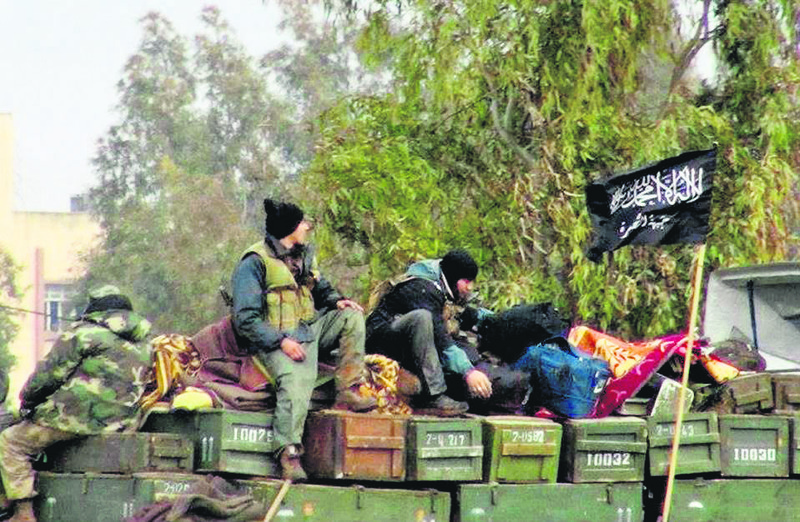 by Associated Press Mar 25, 2015 12:00 am
The Nusra Front, Syria's al-Qaida affiliate, is consolidating power in territory stretching from the Turkish border to central and southern Syria, crushing moderate opponents and forcibly converting minorities using tactics akin to its ultraconservative rival, the Islamic State of Iraq and al-Sham (ISIS). But while ISIS gets most of the attention largely because its penchant for gruesome propaganda, the Nusra Front quietly has become one of the key players in the four-year civil war, compromising other rebel groups the West may try to work with while increasingly enforcing its own brutal version of religious jurisprudence. Its scope of influence now abuts the Golan Heights bordering Israel, and its membership largely composed of Syrian nationals refuse any negotiations with the government of embattled President Bashar Assad, further complicating the brutal conflict. "The Nusra Front will most likely outlast ISIS in Syria, and will represent a severe and existential threat to the aspirations of the Syrian people in terms of a pluralistic, democratic society," said Fawaz A. Gerges, director of the Middle East Center at the London School of Economics.

ISIS helped create the Nusra Front, providing financing, manpower and military hardware in 2012. But the group and its patron eventually had a falling out in 2013 for ideological as well as strategic reasons. The Nusra Front, while loyal to al-Qaida, has cooperated with other Syrian rebel factions in the fight to oust Assad. In recent months, the group has overrun rebel strongholds in Syria's Idlib province, trouncing two prominent, U.S.-backed rebel factions, Harakat Hazm and the Syria Revolutionaries Front.

A Middle East-based Western diplomat said the Nusra Front began its attacks on moderate, U.S.-backed rebel factions after the American-led coalition began airstrikes in September targeting both ISIS and the Khorasan group, which Washington says is a special cell within Nusra plotting attacks against Western interests. U.S. officials last week said airstrikes have hit as many as 17 separate targets connected to the Khorasan group. The Nusra Front responded with a series of spectacular attacks targeting moderate rebel groups and forces loyal to Assad in northwestern Syria, the diplomat said. It "has now created coherent control of a strategic area between Idlib and Hama (provinces) in northwestern and central Syria," said the diplomat, who spoke on condition of anonymity as he wasn't authorized to brief journalists. "They're trying to come across as rational, moderate and more dynamic. They don't celebrate savagery in the same way like ISIS," Gerges said.

Residents say among the group's most worrisome action so far is forcing members of the minority Druze sect living in Idlib's Jabal al-Summaq region to convert to Sunni Islam. The Druze, a 10th century offshoot of Shiite Islam, made up about 5 percent of Syria's pre-war population of 23 million people. In addition to Syria, Lebanon and Israel have large Druze communities. "The Druze in Idlib are being subjected today to religious persecution. The Nusra Front carried out shameful acts. They have dug graves and damaged shrines," said former Lebanese Cabinet minister Wiam Wahhab, a Druze politician with close ties to the community in Syria. Activists estimate several hundred Druze have been forced to convert. A purported Nusra Front document, posted online and dated Feb. 1, outlined an agreement that saw Druze in 14 villages in Idlib convert. Under the deal, the Druze will implement Islamic laws, destroy tombs, impose Islamic dress on women and stop having mixed-sex schools. Idlib-based activist Asaad Kanjo said many Druze there have fled. "You are likely to see this sort of behavior from Nusra in Idlib province because they are increasingly the dominant party in this part of Syria, and are in the midst of a concerted effort to eliminate rivals there. Nusra ultimately wants to rule Syria," said Faysal Itani, a resident fellow at the Atlantic Council. An opposition activist in Kafranbel, a town in Idlib, said the group has established an elaborate network of social services and Shariah courts and rules uncontested. Remaining rebel groups in the province operate only with Nusra's approval, he said. However, the group's increasingly belligerent approach toward other rebel groups is starting to alienate former allies, said the activist, who spoke on condition of anonymity for fear of reprisals.

The main Western-backed Syrian group, the Syrian National Coalition, which in the past has been wary not to criticize Nusra, has changed its tune. "We are concerned over Al Nusra's latest actions and abuses against civilians and (Free Syrian Army) fighters," said spokesman Salem al-Meslet, adding that the abuses were akin to ISIS and Syrian government forces' "criminal behavior." The criticism has led the Nusra Front to issue a rare statement defending itself, saying its target are only those proven to have committed "crimes" against Muslims and fighters. "It was not our intention on any day to spread influence and expand and control the worshippers and the country. Rather, our goal and aim is to lift injustice from the oppressed, and push away every enemy that attacks the honor, religion, and sanctities of the Muslims," the statement from its Al-Manara Al-Bayda media arm said.
Last Update: Mar 25, 2015 2:13 am
RELATED TOPICS