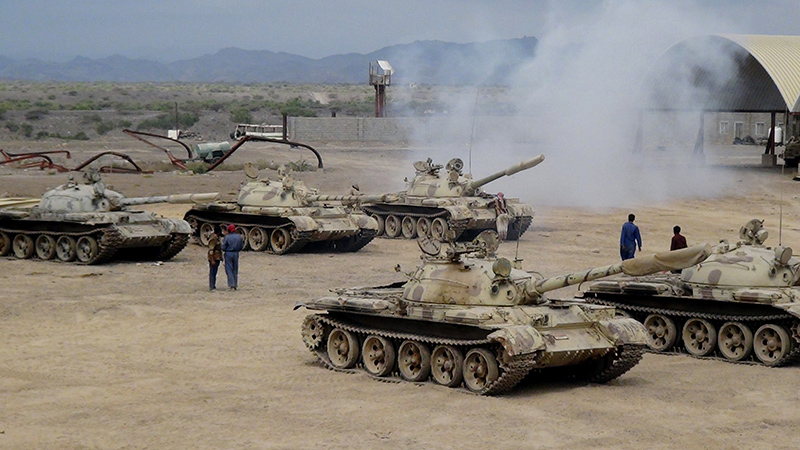 Troops of the 39th Armoured Brigade, who are allied to the Shiite Houthi militia which controls the capital Sanaa, pulled out of the airport just a day after seizing it, the official said.

"Most commanders loyal to Saleh and Houthis have fled their sites in Sanaa following the strikes," a military source, requesting anonymity, told The Anadolu Agency on Thursday.

Saudi Arabia launched Thursday a military operation, including airstrikes, in Yemen against the Shiite Houthi group, which seized capital Sanaa and several provinces.

At least 25 people were killed and 40 others injured in Saudi-led airstrikes in Yemeni capital Sanaa, according to a Health Ministry official.

"Twenty-five people were killed according to a preliminary death toll," the official in the Houthi-controlled ministry told The Anadolu Agency.

He said 40 civilians had also been injured in the strikes.

"The death toll is likely to rise in the coming hours," the official said.

Houthi-run al-Masirah television, meanwhile, said scores of civilians had been killed and injured in the airstrikes.

In a joint statement, five Gulf countries-Saudi Arabia, the United Arab Emirates (UAE), Bahrain, Qatar and Kuwait-said the operation "was in response to a request from Yemeni President Abd Rabbuh Mansour Hadi to protect Yemen from the aggression of Houthi militias."

The statement accused the Houthis of being a "tool in foreign powers that seek to harm the security and stability of Yemen."

According to Saudi media, warplanes from Saudi Arabia, the UAE, Kuwait, Bahrain, Qatar, Jordan, Morocco and Sudan are participating in the anti-Houthi offensive.

Egypt and Pakistan have signaled readiness to deploy ground forces for the operation, the media said.

The United States also said that it was ready to provide logistical and intelligence support for the anti-Houthi offensive.

Saudi Arabia deployed army forces along border with Yemen on Tuesday after Houthi advanced on the southern Aden city, the residence of President Hadi.

No information is yet available about Hadi's whereabouts.

Yemen has been rocked by turmoil since last September, when Houthis overran Sanaa, from where they have sought to extend their influence to other parts of the country.

Some Gulf countries suspect that the Houthi insurgency is supported by Shiite Iran.

Saudi Arabia is contributing 100 warplanes and 150,000 soldiers to the military operation in Yemen, al-Arabiya television reported on Thursday.

Planes from Egypt, Morocco, Jordan, Sudan, Kuwait, the United Arab Emirates, Qatar and Bahrain are also taking part in the operation, it said. Egypt, Pakistan, Jordan and Sudan are ready to participate in a ground offensive, the broadcaster said.