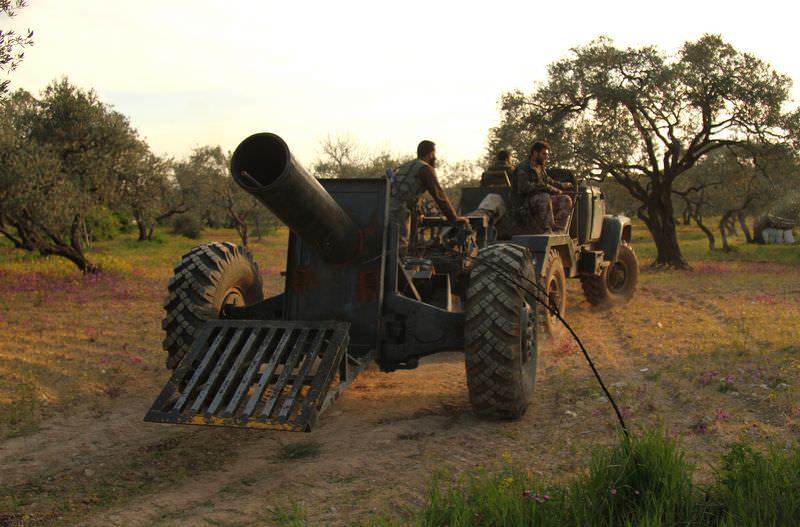 |Photo: AA
by Daily Sabah with Reuters Mar 28, 2015 12:00 am
Opposition groups, including the Free Syrian Army (FSA) and al-Qaida-affiliated Nusra Front, under the name of the Army of Fatah, seized the city of Idlib for the first time in the Syrian civil war, fighters and a monitoring group reported. The offensive to capture Idlib started last on Tuesday and, according to reports, the opposition groups have entirely seized control of Idlib while troops loyal to Syrian President Bashar Assad have escaped to the neighboring city of Latakia, which is one of the strongholds of the regime. The capture of Idlib may change the balances in the war as the opposition groups may launch attacks on Latakia, which has been relatively far from fierce battles.

Idlib, a city whose population has been swollen by hundreds of thousands of displaced people from other parts of Syria, is close to the strategic highway linking Damascus to Aleppo and to the coastal province of Latakia, an Assad stronghold.

"They have entered the city from several sides, but the major push was from the northern and western sides," said Rami Abdelrahman of the Syrian Observatory for Human Rights, a British-based group that monitors the civil war. The alliance calls its operation the Army of Fatah, a reference to the conquests that spread Islam across the Middle East in the seventh century.

Footage posted on the Internet earlier on Saturday by al-Nusra Front showed dozens of fighters in the streets of what a voiceover said was Idlib. "This is my house, for four years I have not entered it. This is my neighborhood, this is our country and by God's will we will liberate it and settle Muslims in it," a fighter said in the video. He was welcomed by several men. Some embraced him and wept.