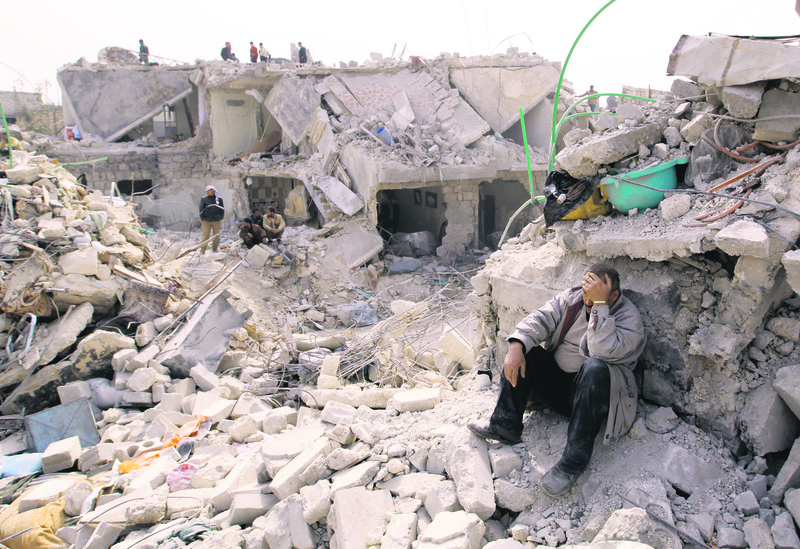 by Daily Sabah with Wires Mar 28, 2015 12:00 am
The United Nations has more than doubled its estimate of Syrians who are living in besieged areas, who risk death by starvation, dehydration and a lack of medical care, to roughly 440,000. The U.N.'s top humanitarian official said that the life expectancy of a Syrian is expected to be 20 years lower than when the conflict started. The U.N. also said that the war, which has recently entered its fifth year, has killed more than 220,000 people. It was also claimed that at least $8.5 billion is needed this year to meet the needs of Syrians.

The Arab uprisings, which euphorically swept across the Middle East and North Africa, attracted Syrians who had lived under the dictatorship of the Assad family since 1970, when Bashar's father Hafiz Assad seized power. Since then the majority Sunnis were forced to live in a police state that tried to control every movement, organization or business through the use a wide-ranging intelligence service. In March of 2011, Syrians were emboldened enough to raise their voices against the dictatorship. However, the regime's response was not as peaceful as the protests. And the country was subsequently dragged into a deadly civil war after opposition groups took up arms against the government. The opposition groups have also been divided internally. While moderate opposition groups like the Western-backed Free Syrian Army (FSA) were struggling for a democratic Syria where all religious and political groups would be free to exist, radical elements like al-Qaida's Syrian branch Nusra Front or the Islamic State of Iraq and al-Sham (ISIS) aimed to establish a new Syria, ruled by an extremist religious jurisprudence.

The fate of the country was changed since the war started. United Nations' top humanitarian official said that the inability of the international community to stop the war means millions of Syrians will continue to suffer. Valerie Amos said the situation has "dramatically worsened." In just the past month, she noted that the number of Syrians living in what are considered "besieged" areas has doubled, from 212,000 to 440,000. Nearly 5 million Syrians live in hard-to-reach areas. "The inability of this Council, and countries with influence over the different parties at war in Syria, to agree on the elements for a political solution in the country means that the humanitarian consequences will continue to be dire for millions of Syrians," said Amos. As the world has taken stock this month of Syria on the anniversary of the conflict, Amos pointed out some of the more grim findings: "Today, a Syrian's life expectancy is estimated to be 20 years less than when the conflict started," she said. "Unemployment is around 58 percent, up from around 10 percent in 2010; nearly two-thirds of all Syrians are now estimated to be living in extreme poverty." Amos later told reporters that $8.5 billion is needed this year to address the crisis both in and outside Syria, whose neighbors say they are overwhelmed by millions of refugees. Many aid groups and others in the international community say the divided council has failed the Syrian people on this and other issues. Russia, Syria's ally, has blocked actions such as an attempted referral of the country's situation to the International Criminal Court, though some diplomats say they'd like to try again for a referral.
Last Update: Mar 28, 2015 2:05 am
RELATED TOPICS