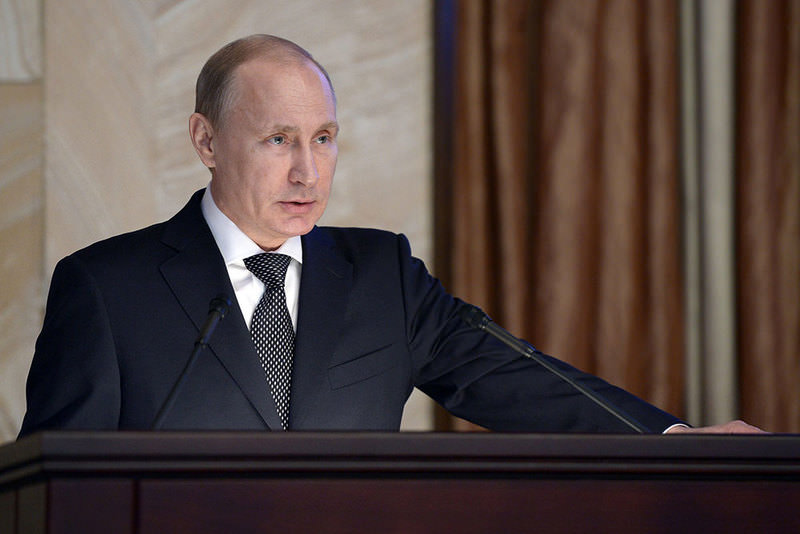 by Anadolu Agency Mar 29, 2015 12:00 am
Russia will keep contributing to the establishment of an independent Palestinian state with its capital in East Jerusalem, President Vladimir Putin said on Saturday.

"Palestinians have the right to establish an independent and habitable state with a capital in East Jerusalem. Russia will continue to contribute to achieving this goal through bilateral and multilateral channels," Putin said in his address to the 26th annual Arab League Summit that started on Saturday in Egypt's Red Sea resort of Sharm el-Sheikh.

The Russian president also stressed the need to solve the problems in the Arab world through peaceful means and without foreign intervention.

The roots of the Palestine-Israel conflict date back to 1917, when the British government, in the now-famous "Balfour Declaration," called for the establishment in Palestine of a national home for the Jewish people.

In 1948, with the expiry of a League of Nations "mandate" awarded to Great Britain, the new State of Israel was declared inside historical Palestine region.

As a result, some 700,000 Palestinians fled their homes, or were forcibly expelled, while hundreds of Palestinian villages and cities were razed to the ground by invading Jewish forces.

Israel went on to occupy East Jerusalem and the West Bank during the 1967 Six-Day War. It later annexed the holy city in 1980, claiming it as the capital of the self-proclaimed Jewish state in a move never recognized by the international community.

The Ramallah-based Palestinian Authority wants an independent state in the Gaza Strip and the West Bank, with East Jerusalem as its capital.