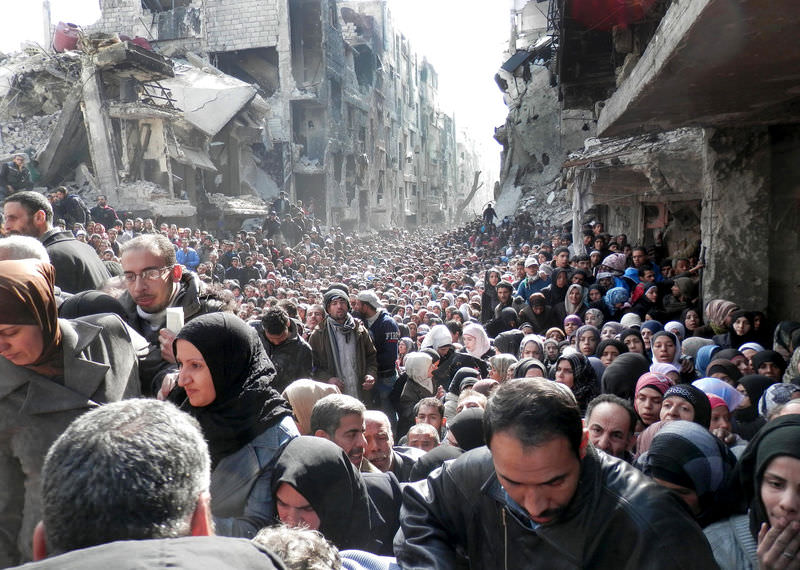 by Apr 01, 2015 12:00 am
Fighters proclaiming allegiance to the Islamic State of Iraq and a-Sham (ISIS) seized most of a vast camp for Palestinian refugees on the outskirts of Damascus on Wednesday, a bid to capture the group's first major foothold close to President Bashar al-Assad's seat of power.

ISIS fighters already control swathes of eastern Syria and northern Iraq and are facing an international campaign of air strikes led by the United States. Until now they did not have a major presence in the area around the capital, where insurgents have mainly been loyal to other groups.

The Yarmouk refugee camp, home to half a million Palestinians before the conflict began in 2011, has been besieged by government troops since the early days of the war. It is a few kilometres from the heart of Damascus, which is still firmly in government hands.

Mirroring the way ISIS has grown elsewhere in Syria, its fighters seized control of areas of the camp from other insurgents, helped by rebels from the rival al Qaeda-linked Nusra Front who switched sides, a political activist in the area said.

"They pushed from the Hajar Aswad area and Nusra fighters have joined them, they have pledged loyalty to ISIS," the activist said, speaking via Skype.

Anwar Abdel Hadi, the Palestine Liberation Organisation representative in Damascus, said: "ISIS went into Yarmouk today. There are clashes between the militants at the moment."

The United Nations said it was extremely concerned about the safety and protection of Syrian and Palestinian civilians there. It estimates the population of Yarmouk at about 18,000, with most of its residents having long since fled.

ISIS has been trying to expand into western areas of Syria far away from its strongholds on the other side of the country, where it faces the U.S.-led air strikes.

Its fighters killed 45 people including entire families, burning some people to death, overnight on Monday in the government-held village of Mabouja in western Syria, according to the Syrian Observatory for Human Rights, a Britain-based group that monitors the war.