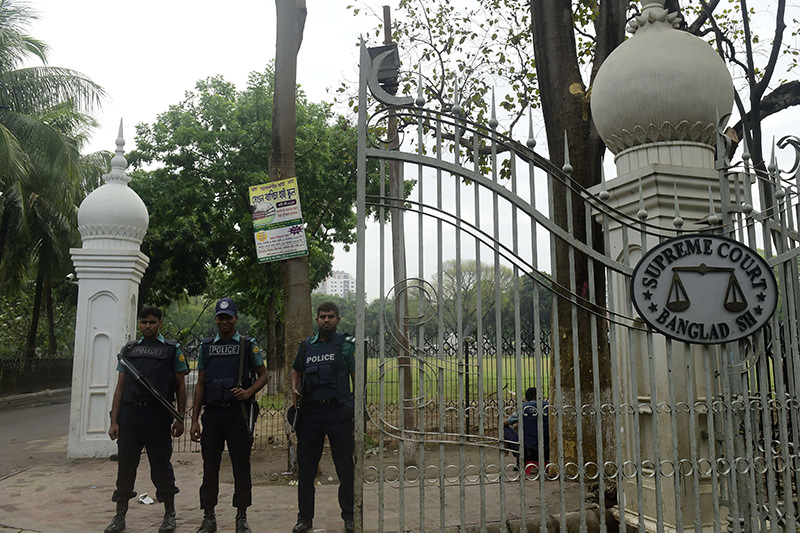 | AFP Photo
by Daily Sabah with AP Apr 06, 2015 12:00 am
A Bangladeshi Court has rejected the final appeal of Mohammad Kamaruzzaman, an assistant secretary general of Jamaat-e-Islami party, and upheld his death sentence for war crimes on Monday.

If Kamaruzzaman seeks presidential clemency and is rejected, he will be executed soon after. The 62-year old politician would be the second person put to death since tribunals were set up more than four years ago to try suspected war criminals.

In November last year, the Supreme Court upheld a verdict of death sentence by a special tribunal for his crimes against humanity during the country's 1971 independence war against Pakistan. Later he appealed for a review.

Bangladesh blames Pakistani soldiers and local collaborators for the deaths of 3 million people during the nine-month war seeking independence from Pakistan. An estimated 200,000 women were raped and about 10 million people were forced to take shelter in refugee camps in neighboring India.

Qamaruzzman's lawyer, Khandaker Mahbub Hossain, argued that the death sentence should be reviewed for ensuring justice for the leader, but the state side said he must be hanged considering the level of crimes he was involved in during the mass killings by collaborators and Pakistani soldiers.

Attorney General Mahbubey Alam welcomed the decision by the court and said it was now just a matter of execution as it is highly unlikely that Qamaruzzman will be pardoned.

In reaction to the court's decision, the Jamaat-e-Islami party called a 48-hour general strike from Tuesday morning.

TV stations reported that clashes had broken out following the ruling. One young activist was killed on Monday during clashes between police and Jamaat-e-Islami supporters in the southern district of Noakhali, the stations said.

Since 2010, two tribunals have convicted more than a dozen people, mostly senior leaders of the opposition Jamaat-e-Islami party, which had openly campaigned against independence. The party says the trials are politically motivated.

Prime Minister Sheikh Hasina set up the tribunals in 2010, reviving a stalled process and making good on a pledge she made before the 2008 elections.

There was a process of trying suspected war criminals after Bangladesh gained independence, but it was halted following the assassination of then-President and independence leader Sheikh Mujibur Rahman Hasina's father and most of his family members in a military coup in 1975.
Last Update: Apr 06, 2015 1:07 pm
RELATED TOPICS