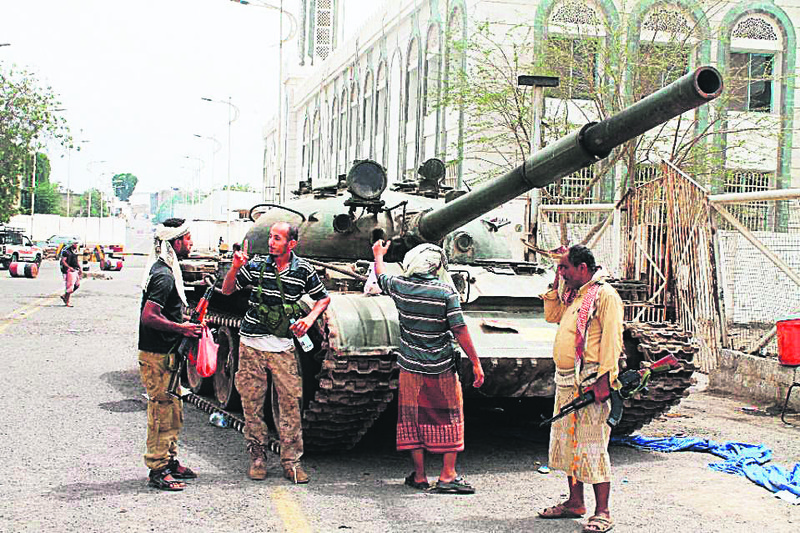 Iran-backed Houthi rebels still control the capital, Sanaa despite the Saudi-led air strikes.
by Daily Sabah with Wires Apr 06, 2015 12:00 am

While Saudi Arabian warplanes continue to pound Iran-backed Houthi rebels' positions, Sunni tribes and al-Qaida are pursuing their own interests amid the escalated tension in Yemen

Warplanes from a Saudi-led coalition bombed Yemen's capital Sanaa overnight, residents said, on the eleventh day of a campaign against Iran-allied Houthi forces opposed to President Abd-Rabbu Mansour Hadi. The raids came although Russia which supports the Iranian policy towards Yemen, appealed on Saturday for a military pause in Yemen to allow urgent humanitarian aid deliveries and evacuation of civilians. The International Committee of the Red Cross (ICRC) also called for an immediate pause in hostilities to deliver life-saving medical aid yet Saudi Arabia rejected the claim. "All air, land and sea routes must be opened without delay for at least 24 hours to enable help to reach people cut off after more than a week of intense air strikes and fierce ground fighting nationwide," the ICRC said in a statement. Residents reported explosions at bases housing army units loyal to the Houthis, while air strikes also hit areas along Yemen's border with Saudi Arabia.

Yemen's Houthi militiamen, supported by army units, gained ground in the southern city of Aden on Sunday, pushing back loyalists of the president. Residents took refuge in their homes and reported hearing sporadic gunfire and blasts of rocket-propelled grenades, and one witness saw a Houthi tank in the downtown Mualla district, which sits astride Aden's main commercial port. Shiite rebels freed more than 300 prisoners in the southern city of Dhale, Yemeni security officials said. Houthi forces have inched forward in street-fighting in the city despite an 11-day nationwide bombing campaign by a Saudi-led coalition aimed at halting the Iran-allied group and protecting Hadi's last bastion of support in the country. The crates of light weapons, telecommunications equipment and rocket-propelled grenades were parachuted into Aden's Tawahi district, on the far end of the Aden peninsula which is still held by Hadi loyalists, fighters told Reuters. Saudi Arabia has said defending Aden's government is a "main objective" of its mission and Hadi's administration has called for a foreign ground intervention into the beleaguered city.

Meanwhile, armed Yemeni tribesmen deployed across the streets of Mukalla on Sunday, residents and local officials said, taking control of the eastern port town which had been briefly overrun by al-Qaida militants. The tribal fighters entered Mukalla on Saturday, pledging to restore security after the militants broke into its jail on Thursday, freed a local al-Qaida leader, ransacked banks and took over local government buildings, residents said. However, al-Qaida also made gains after Houthis left presidential palace in Aden. Al-Qaida militants seized a major army base in the southeast.

The country has long suffered from political instability and insecurity due to threats posed by various militant groups. Since former President Ali Abdullah Saleh stepped down in 2012, ending his 33-year rule, the country has been in a state of constant turmoil. In addition to clashes between government forces and Houthi militants, the rival militant groups, al-Qaida and the Houthi rebels, have fought a bloody battle to gain control over several places.
Last Update: Apr 06, 2015 2:13 am
RELATED TOPICS