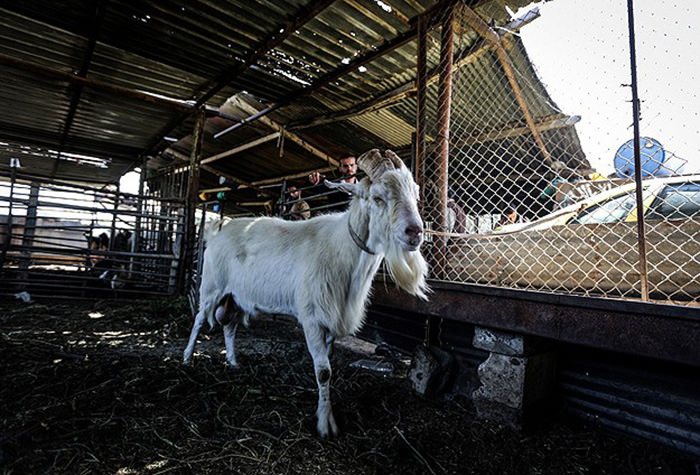 |AA Photo
by Anadolu Agency Apr 09, 2015 12:00 am
A Gazan citizen on Monday expressed his frustration over a decision by Gaza's Agriculture Ministry to have his male goat put down because it produces milk.

Jasser Abu Saeed, a resident of the Bureij refugee camp in central Gaza, told Anadolu Agency (AA) that the Agriculture Ministry had decided to have his goat put down because it was "creating confusion and could have adverse health effects on those who drink its milk."

Abu Saeed, however, said he would fight the decision, recalling his surprise last week when he found that his male goat had breasts and was capable of producing milk.

In recent days, people have flocked to Abu Saeed to purchase the milk of his male goat, believing it might cure them of maladies – such as impotence or skin disease – or work against "magic spells."

"The ministry accused me of 'stirring controversy' and selling the goat's milk on the pretext that it cures all ailments," Abu Saeed said.

Zakaria Kafarna of Gaza's Agriculture Ministry confirmed to AA that the decision had been taken to have the unique goat put down.

"We made this decision to avoid stirring up confusion and to prevent any harm from befalling those who believe the goat's milk can cure illnesses. If a male goat secretes milk, this means the animal is suffering from a hormonal imbalance, which could have adverse effects on those who drink its milk," Kafarna said.