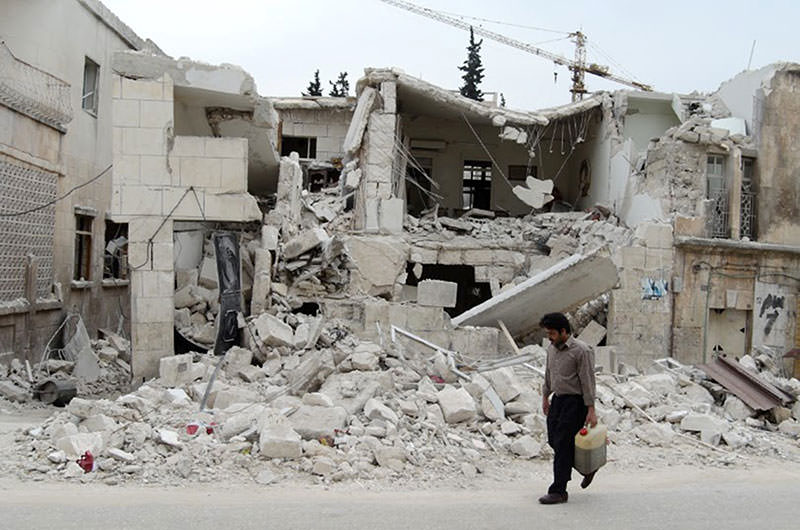 | Photo: AA
by Ragıp Soylu Apr 10, 2015 12:00 am
The Organization for the Prohibition of Chemical Weapons (OPCW), an international chemical weapons watchdog, is currently analyzing the information related to allegations concerning the latest chlorine attack in Idlib, Syria and will decide on a course of action accordingly, OPCW Director-General Ahmet Uzumcu said yesterday during a speech at the Brookings Institute in Washington.

Uzumcu, a Turkish career diplomat who previously served as the permanent ambassador of the Republic of Turkey to the United Nations Office in Geneva, hinted that if the allegations of a chemical attack in Syria are substantiated, the OPCW's fact-finding mission will collect the evidence and prepare a report as it did for similar attacks last year.

Last month a new series of allegations were raised by the U.K.-based Syrian Observatory for Human Rights in Idlib on YouTube regarding the use of chlorine gas following victory by opposition groups in the region. A statement from the group said the forces of the regime of President Bashar Assad had killed at least six people, including three children.

Assad refuted the allegations that his military used chlorine gas on civilians in a recent CBS News interview, and said: "Chlorine gas is not military gas." However, increasing amounts of new evidence is suggesting that Assad's denial is not true. The OPCW's report on the past attacks that took place in Idlib and Hama in 2014 alleged that gas bombs were systematically dropped by helicopters, which only the regime has the capability to do. Uzumcu also added that although chlorine gas is not a chemical weapon per se, the convention defines that any chemical substance that could be used for hostile purposes is considered such a weapon.

U.N. Security Council Resolution 2209, passed last month, condemned the 2014 attacks and warned the Syrian government that this was the first documented instance of the use of toxic chemicals as weapons within the territory of a State Party to the Chemical Weapons Convention. The U.N. Security Council then decided that in the event of future noncompliance, it will impose measures against the Assad regime, including military action. This is why the verification of the recent allegations in Idlib could put Assad in a very bad position.

Robert Ford, former U.S. ambassador to Damascus, warned about the increasing use of chemical weapons in the country because of the absence of accountability. "Russians never acknowledged [it] and the Syrian regime has never accepted that they had used sarin gas nor said that they had a chemical weapons program. The Syrian government so far is still not deterred. We will probably see, I regret to say, additional allegations on the use of chlorine gas."

Ford, speaking at Brooking's Syrian weapons panel, said the Syrian government was in a minority position in a war of attrition, and that the Assad regime could use chlorine gas in the future to equalize the military balance on the ground as it has done in the past. "That can encourage terrorist groups in the region that they can get away with gas attacks as the regime does. We should find ways to put pressure on the Syrian government and hold it accountable. The party that uses chlorine gas needs to be named publicly by the international organizations to deter future use."