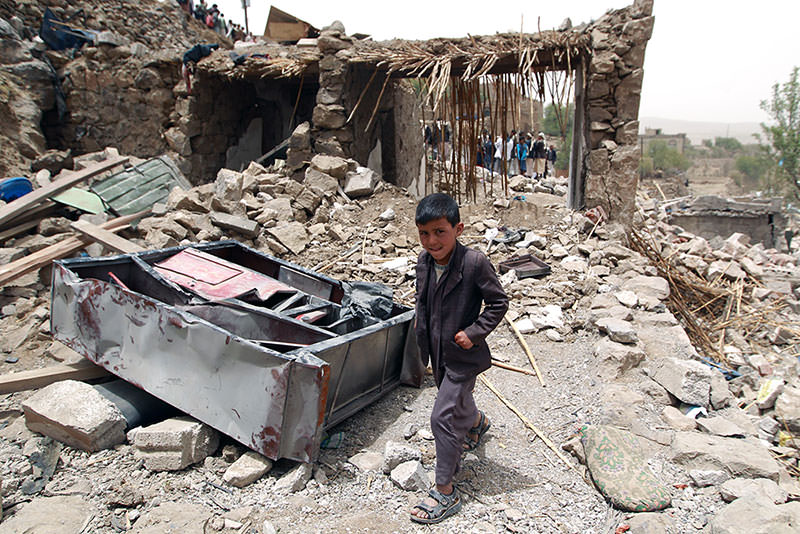 A Yemeni boy walks past the rubble of destroyed houses in a village 70 kilometers west of Sanaa | AFP Photo
by French Press Agency - AFP Apr 10, 2015 12:00 am
The United Nations called on Friday for an immediate "humanitarian pause" of at least a few hours each day in Yemen to allow desperately needed aid to enter the conflict-ravaged country.

The Red Cross and UN's children agency finally managed to get two planeloads of medical aid into the country on Friday - the first to reach Sana'a since Saudi-led air strikes against Shiite rebels began last month.

Doctors Without Borders also managed to get a boatload of aid to Aden earlier this week.

But Johannes Van Der Klaauw, the UN's humanitarian coordinator in Yemen, insisted that the aid that got through was far from enough.

Speaking to reporters in Geneva, he called for an "immediate humanitarian pause in this conflict."

The UN is trying to negotiate with all the sides in the conflict to ensure safe access, he said.

Iran-backed Shiite Houthi rebels have seized swathes of territory in Yemen since they entered Sanaa last September, forcing the government to flee.

Yemen has slid deeper into turmoil after a Saudi-led air campaign began on March 26 to push back the rebels' advance after they forced President Abedrabbo Mansour Hadi to flee the country.

The World Health Organization said nearly 650 people have died and more than 2,000 have been injured in the fighting in Yemen, the actual numbers are likely far higher since many people are not reaching hospitals but are being buried immediately, Van Der Klaauw said.

He insisted on the importance of opening "a window of opportunity" to bring aid to civilians amid fears of a mounting humanitarian crisis.

Even before the latest escalation, some 16 million Yemenis were in need of humanitarian assistance and nearly half of all Yemeni children were considered chronically malnourished.

"This was already one of the largest and most complex humanitarian emergencies in the world," Van Der Klaauw said, pointing out that the violence risks leading to severe food shortages.

Shortages of fuel also means water pumps will soon stop working, and Van Der Klaauw warned that in Aden alone, "one million people risk being cut off from access to clean drinking water within a matter of days."

"The situation in Aden is extremely, extremely preoccupying if not catastrophic," he said, warning that Yemen's second largest city had fallen prey to "urban warfare" and "uncontrollable militias."