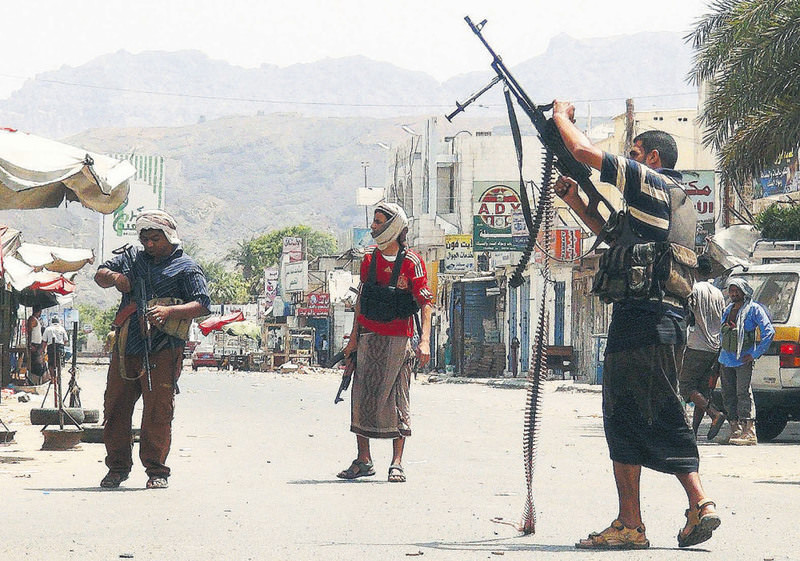 Clashes have intensified among Iranian-backed Houthi rebels, Sunni tribesmen and al-Qaida militants in Yemen.
by Yusuf Selman İnanç Apr 12, 2015 12:00 am

The Saudi Ministry of Defense was quoted by the Saudi Press Agency as saying that more than 500 Iranian-backed Houthi rebels have been killed since airstrikes started two weeks ago. Coalition Spokesman Ahmed al-Asiri said: "The coalition carried out 1,200 airstrikes on Houthi positions. These strikes have weakened the group." He added that the strikes also targeted the deposed autocrat President Ali Abdullah Saleh. He also said that Saudi Arabia has not ruled out the possibility of an Iranian presence in Yemen.

In line with his statement, Reuters reported that local militias confirmed the presence of Iranian officers from an elite unit of the Iran's Revolutionary Guards. To this end, the proxy war between Tehran and Riyadh is real. Even so, Saudi Minister of Foreign Affairs Saud al-Faisal on Sunday said: "Saudi Arabia is not at war with Iran." Yet he added: "We hope that the Islamic Republic [of Iran] ends its support of Houthi militias. How can Iran call for us to stop the fighting in Yemen? ... We came to Yemen to help the legitimate authority, and Iran is not in charge of Yemen."

Although rights groups, the Red Crescent and residents claim that the humanitarian situation has worsened in the country as water supplies have been cut and daily life has almost stopped, France pledged its support for the airstrikes. French Minister of Foreign Affairs Laurent Fabius said that France was "naturally on the side of its regional partners for the restoration of stability in Yemen," according to his entourage. "Concerning Yemen, we are here to demonstrate our support, especially political, to the Saudi authorities," Fabius told reporters as he began a series of meetings with the Saudi leadership including King Salman.

On Sunday, airstrikes continued to target Houthi positions and their allies. A pre-dawn strike hit Camp 22 in al-Dhahra in the south of Taez province killing 15 rebels or allied troops, a medic at al-Thawra hospital said. "The base belongs to the elite Republican Guard that remained loyal to former president Ali Abdullah Saleh after he was forced from power in 2012 following a year of nationwide protests against his three-decade rule," Agence France-Presse (AFP) reported. It was also reported that there were many casualties in clashes between Houthis and Sunni tribesmen in Maarib, but the number has not been reported. In another town, Shabwah, sources reported that many people were killed in clashes.

Al-Qaida militants are attempting to expand their control over southern parts of the country amid fierce battles, benefiting from the absence of authority. "The militants have taken advantage of the security vacuum to seize control of Mukalla, the capital of Hadramawt province in the southeast," AFP reported.

The conflict in the country has worsened the humanitarian situation and Yemen has apparently been dragged into a civil war. More than 100,000 people in Yemen have left their homes in search of safety and at least 74 children have been killed since fighting in the country intensified almost three weeks ago, UNICEF said. UNICEF said the violence has disrupted water supplies in areas of southern Yemen and that sewage is overflowing in some locations, raising the risk of outbreak of disease. Hospitals are struggling to treat the large numbers of wounded with insufficient supplies and some medical facilities have come under attack, the agency added.

Pitched fighting intensified Monday in Yemen's second-largest city, Aden, leaving streets littered with bodies, as Houthi rebels and their allies waged their strongest push yet to seize control of the main bastion of supporters of their rival, the country's embattled president, Abd Rabbuh Mansur Hadi. The fierce fighting in the southern port city on the Arabian Sea raises doubts over the possibility of landing ground forces from a Saudi-led coalition backing Hadi to try to carve out an enclave to which Hadi, who fled the capitol two weeks ago, could return.

Saudi Arabia has asked Pakistan to contribute soldiers to the military campaign as well as air and naval assets, Pakistan's defense minister said on Monday. Pakistan's parliament is debating the request and is expected to vote in the coming days. Houthi fighters and pro-Saleh forces attacked Aden's Moalla neighborhood, one of the last districts held by Hadi loyalists where the presidential palace, port facilities, TV, government offices and a military camp are located. The districts are on a peninsula that juts into the sea, meaning Hadi's forces are bottled up in the neighborhoods.

"We are jumping over dead bodies," Radwan Allawi, a pro-Hadi fighter, told the Associated Press from Aden. He said mosque loudspeakers were calling on Hadi's supporters to defend Moalla. "It's intense street fighting, direct fire. The only difference between life and death may be an electricity pole behind which one can hide," the 20-year-old said. Pro-Hadi fighters destroyed three tanks deployed in Moalla by their opponents overnight only to find new ones on Monday. At least one residential building was in flames from the fighting. Saudi coalition forces started an airdrop of weapons for Hadi's forces on Friday, but some military officials say the weapons are falling into the wrong hands. The number of casualties was not immediately known, with medical facilities in the city overwhelmed and volunteers coming under fire from rival groups.

Yemen's slide into civil war has made the country a crucial front in the mostly Sunni Saudi Arabia's rivalry with Shiite Iran, which Riyadh accuses of stirring up sectarian strife through its support for the Houthis. Sunni Arab monarchies around Yemen have condemned the Shiite Houthi takeover as a coup and have proposed a military intervention in favor of Hadi in recent days. The advance of the Iranian-allied Houthi group raises fears of the possible disintegration of the country.

Sanaa has been under Houthi rebel control since September of last year. The country has been facing severe political instability after the takeover of the presidential palace by Houthi militants prompted Hadi to tender his resignation. Hadi fled to the southern port city of Aden where he has re-established his presidency. As the country continues to be dragged into civil war, the U.N. has started to hold mediated peace talks between Houthis and Hadi's government in a bid to bring peace and stability back to the country.
Last Update: Apr 13, 2015 11:12 am
RELATED TOPICS