ISIS claims car bomb attack near US Consulate in Irbil 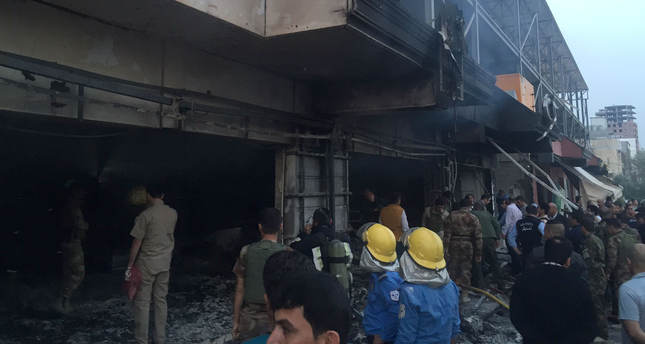 Emergency workers gather at the scene of a car bomb in northern city of Irbil, Iraq, Friday, April 17, 2015
by Daily Sabah with Reuters Apr 17, 2015 12:00 am
The ISIS militant group claimed a car bomb attack near the U.S. consulate in Irbil in Iraqi Kurdistan, the monitoring group SITE said on Friday.

It cited an ISIS account on Twitter saying fighters from its Kirkuk division "were able to detonate a car bomb on the building of the American Consulate in the city, which led to killing and wounding many of them".

The attack came after the capture of Ezzat al-Douri, a key figure of Saddam's regime and Iraq's Sunni insurgency.

Gunshots were heard after the explosions, meanwhile photos showing a black fume was shared from the area on several Twitter accounts.

The Nili cafeteria, operated by Turkish citizens, was severely damaged.

Two Turkish victims were identified by their relatives on Saturday. Sadettin Şan (29) and Bilind Önen (34), both registered in the southeastern city of Mardin and whose families live in adjacent city of Diyarbakır, were in Irbil for work purposes.

Şan and Önen's bodies set off towards Turkey and are expected to arrive at Mardin Public Hospital for autopsy, and later will reportedly be buried in Diyarbakır.