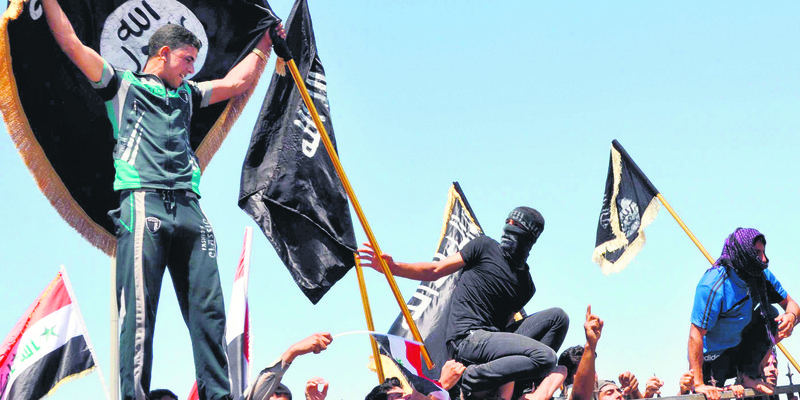 by Associated Press Apr 20, 2015 12:00 am
Islamic State of Iraq and al-Sham (ISIS), which controls a third of both Iraq and Syria in its self-declared caliphate, found itself driven out of the city of Tikrit on Wednesday by an allied Iraqi force backed by U.S.-led airstrikes. The month-long offensive to retake Tikrit, the hometown of Saddam Hussein some 130 kilometers north of Baghdad, is the biggest victory yet for Iraq since the extremists' campaign last summer. However, ISIS remains a potent threat, officials warn.

Here's a look at the group's birth, its atrocities and the world's response to the militants:

April 18, 2010 — U.S. and Iraqi forces kill two top al-Qaida in Iraq leaders, allowing al-Baghdadi to become the leader of a group weakened by a concerted campaign aimed at ending a Sunni insurgency in the country.

Oct. 31, 2010 — Al-Baghdadi's al-Qaida militants attack Our Lady of Salvation Catholic church in Baghdad during Sunday night mass, killing 58 people in the deadliest assault targeting Christians since the 2003 U.S.-led invasion there. The militants reportedly demand the release of Muslim women they claim were held by Egypt's Coptic Christian church.

July 21, 2012 — In his first purported online message, al-Baghdadi promises to regain lost ground in Iraq and calls on militants to "chase and liquidate the judges, the investigators and the guards." Within days, his group begins a campaign of attacks, car bombings and other assaults killing hundreds. He also mentions Syria, in the grips of a civil war pitting largely Sunni rebels against embattled President Bashar Assad. By this time, al-Baghdadi already has begun to send fighters there.

April 2013 — Al-Baghdadi announces his group has taken over the Nusra Front, the al-Qaida affiliate in Syria. Nusra denies the takeover, sparking anger and infighting that continues to this day.

January 2014 — Al-Baghdadi's forces sweep into Ramadi and Fallujah in Iraq's Anbar province, which Iraqi security forces had abandoned weeks earlier. That came after security forces killed demonstrators during a Sunni protest, effectively turning the unrest into an uprising.

Early February 2014 — Al-Qaida breaks with al-Baghdadi's group, now known as ISIS. Al-Baghdadi ignores al-Qaida as his group now has control of wide regions of Syria, including the city of Raqqa, which becomes the group's de facto capital.

June 10 — Al-Baghdadi's fighters take over Iraq's second-largest city of Mosul, followed by Saddam Hussein's hometown of Tikrit and smaller communities in the Sunni heartland as government forces melt away.

June 29 — The group declares the establishment of a so-called caliphate, in territories it controls in Iraq and Syria and demands allegiance from Muslims worldwide. It declares al-Baghdadi the leader of the new caliphate. The militants rename themselves the Islamic State group.

July 5 — A man purporting to be al-Baghdadi makes his first public appearance, delivering a sermon at a mosque in Mosul.

Aug. 8 — The U.S. begins targeting ISIS with airstrikes, citing the humanitarian plight of Iraq's minorities, like the Yazidi.

Nov. 8 — Iraqi officials say al-Baghdadi is wounded in an airstrike on an Iraqi town near the Syrian border. Days later, an online audio message purportedly from al-Baghdadi urges his followers to "explode the volcanoes of fighting everywhere."

Jan. 10 — An online video shows Taliban fighters in Pakistan pledge loyalty to ISIS and behead a man they identify as a soldier. Similar pledges previously arose from Egypt, Yemen and elsewhere in the Mideast. Afghan authorities later acknowledge a similar presence in their country.

Jan. 26 — Kurdish fighters take control of the Syrian border town of Kobani near Turkey after fighting ISIS for months. U.S.-led airstrikes helped turn the tide for the Kurds.

Feb. 3 — ISIS releases a video of it burning al-Kaseasbeh to death in a cage, sparking outrage in Jordan, which launches new strikes targeting the militants.

Feb. 15 — Libyan militants who earlier pledged their loyalty to ISIS behead a group of Coptic Christians from Egypt in an online video.

Feb. 16 — Egypt launches airstrikes in Libya in retaliation for the beheadings.

March 11 — After days of besieging Tikrit, Iraqi troops and allied Shiite militiamen enter the ISIS -held city, backed by Iranian advisers and forgoing the air support of the U.S.-led coalition.

March 25 — The U.S.-led coalition begins airstrikes on Tikrit after Iraqi efforts to take the city stall. Shiite militias pull out of Iraqi forces in protest, but later rejoin the offensive.

April 1 — Iraq declares a "magnificent victory" over ISIS in Tikrit, its biggest gain yet against the militants.
Last Update: Apr 20, 2015 11:19 pm
RELATED TOPICS