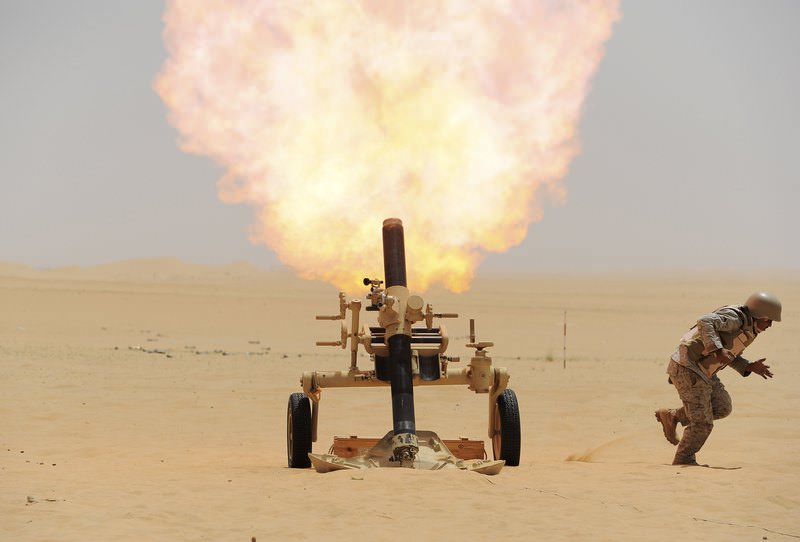 A Saudi soldier fires a mortar towards Houthi movement position, at the Saudi border with Yemen April 21, 2015 (Reuters Photo)
by Compiled from Wire Services Apr 21, 2015 12:00 am
The Saudi-led coalition who are bombing Yemen announced on Tuesday an end to the military operation that pounded the Iran-allied Houthi rebels for more than three weeks, a statement read on Saudi-owned Arabiya TV said.

The alliance had achieved its military goals in Yemen through the campaign dubbed "Storm of Resolve" and will now begin a new operation called "Restoring Hope," it said.

He said the main goals of the offensive have been achieved.

"Legitimacy has been defended and Yemenis are no longer at risk after Houthi militiamen have lost most of their capabilities," added al-Asiri.

He asserted that the Shiite militants no longer pose a threat to Yemen's neighbors.

On March 25, Saudi Arabia and several Arab allies launched a military offensive against the positions of Houthi militants across Yemen.

Riyadh said the campaign came in response to Hadi's appeals to "save the [Yemeni] people from the Houthi militias."

The Houthis, for their part, have decried the offensive as unwarranted "Saudi-American aggression."