US Navy sends carrier towards waters off Yemen 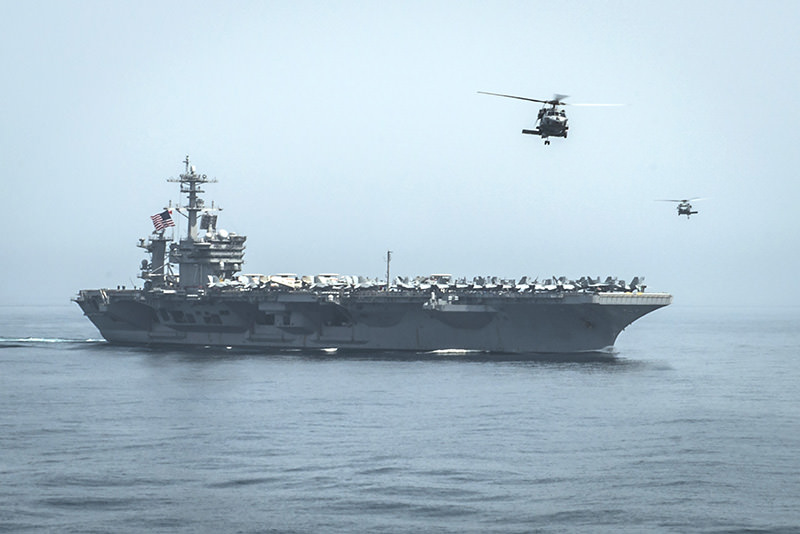 | Reuters Photo
by Daily Sabah with Agencies Apr 21, 2015 12:00 am
The United States has dispatched the aircraft carrier USS Theodore Roosevelt toward the waters off Yemen to join other American ships preparing to intercept any Iranian vessels carrying weapons to the rebels, U.S. officials said.

The US said it sent the USS Theodore Roosevelt, escorted by guided-missile cruiser USS Normandy, "to ensure the vital shipping lanes in the region remain open and safe", bringing the number of American ships in the area to nine.

The announcement that the USS Theodore Roosevelt was heading for the region came amid reports that a convoy of Iranian ships may be headed toward Yemen to arm the Houthis.

White House spokesman Josh Earnest, on the other hand, would not comment specifically on any Navy movements in Yemeni waters, but said the U.S. has concerns about Iran's "continued support for the Houthis.

"We have seen evidence that the Iranians are supplying weapons and other armed support to the Houthis in Yemen," White House spokesman Josh Earnest said. "That support will only contribute to greater violence in that country. These are exactly the kind of destabilizing activities that we have in mind when we raise concerns about Iran's destabilizing activities in the Middle East."

The United States says it is not taking part directly in the strikes, but is providing intelligence and logistical support.