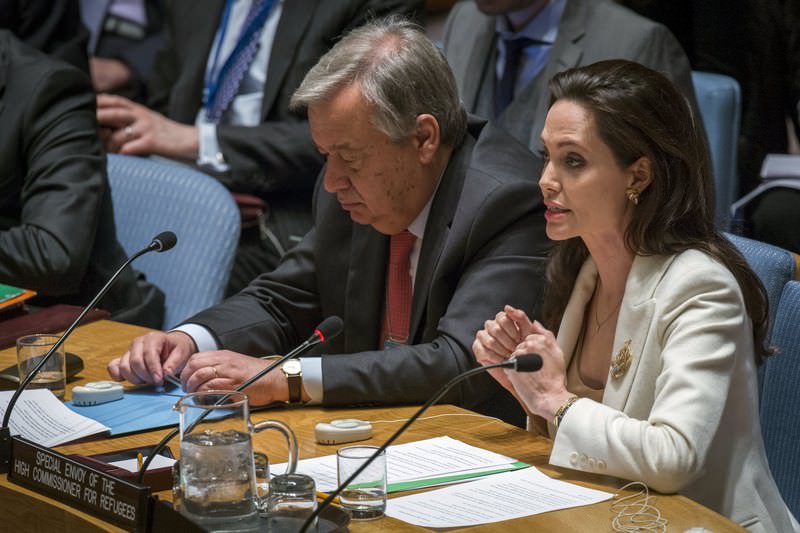 by Compiled from Wire Services Apr 24, 2015 12:00 am
Actress Angelina Jolie on Friday criticized the UN Security Council's failure to end the war in Syria, as she appealed for urgent help for the growing ranks of Syrian refugees.

"The crisis is made worse by division and indecision within the international community - preventing the Security Council from fulfilling its responsibilities," the Academy Award winning actress and UN special envoy for refugee issues said at the UN meeting on the humanitarian situation in Syria, where a four-year civil war has claimed more than 220,000 lives.

The 15-member Council has faced broad criticism for its failure to address the conflict in a way that would bring about a halt to the violence. Permanent Council members and allies of Syria's embattled President Beshar al-Assad - Russia and China-have blocked four attempts at action.

"The Security Council has powers to address these threats to international peace and security - but those powers lie unused," Jolie said. "The problem is lack of political will."

She said many people are provided with vital humanitarian aid by the UN every day, but "all of this good is undermined by the message being sent in Syria: that laws can be flouted - chemical weapons can be used, hospitals can be bombed, aid can be withheld and civilians starved - with impunity."

"Those refugees cannot come to this Council, so please, will you go to them?" she asked.

More than 7.6 million citizens are displaced within Syria and nearly 4 million have sought refuge in neighboring countries, according to the UN.