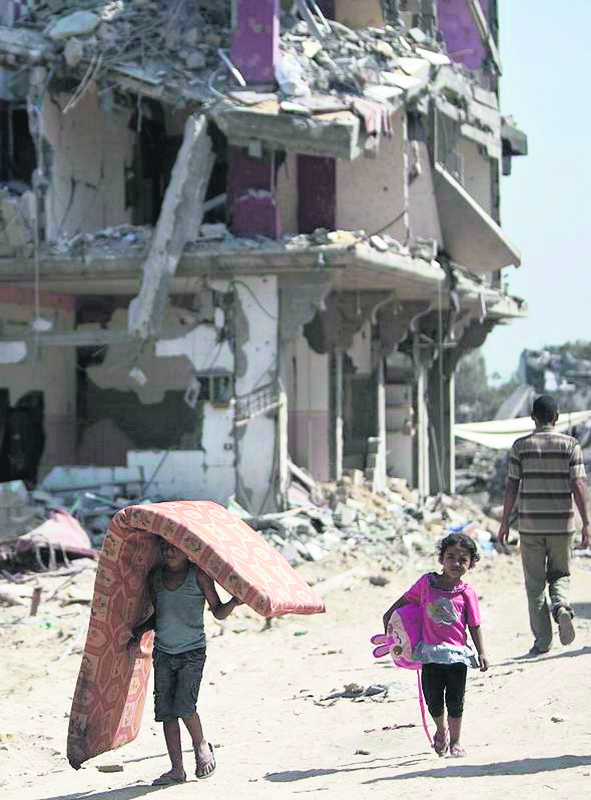 Six months after the Israeli onslaught on Gaza, Israel has pounded Gaza more than 400 times. Yet, only four rockets were reportedly fired into Israel

Since last summer's temporary cease-fire, Israel has continued to commit violations of international law by pounding Gaza City. As a response to more than 400 incidents of Israeli fire into Gaza, only four rockets were reportedly fired into Israel, the human rights watchdog, Oxfam, said.

"Since the temporary cease-fire was announced, there have been no visible efforts to translate this into a transparent, robust and enforceable agreement," Oxfam said, in a report titled "Charting a New Course: Overcoming the Stalemate in Gaza."

"The temporary cease-fire reached on Aug. 26, 2014 has not prevented further violence. Israeli forces continue to fire on farmers and shepherds, and on agricultural lands in border areas in the Gaza Strip. There have been more than 400 incidents of border and naval fire by Israeli forces since the cease-fire until March 31, 2015, resulting in the death of one fisherman and injuries to other Palestinians workers. But only four rockets have been fired from Gaza toward Israel, resulting in no injuries. The evidence that persistent impunity begets persistent and increasingly devastating conflict is undeniable," the report said, stressing that there is no viable cease-fire holding in the Palestinian enclave. The report also underscored the crucial need for a permanent cease-fire in order to pick the pieces up in Gaza city after the long Israeli onslaught in Gaza, while urging Israel to end the Gaza blockade.

Considering the heavy Israeli attacks on the Palestinian enclave, the world remains silent over Israeli violence against civilians. However, Israel's retaliatory attacks in the Gaza Strip can easily draw attention, as many international media outlets mentioned the latest Israeli strike on Gaza as breaking news. Israeli tanks targeted Hamas in the Gaza Strip on Friday morning after a rocket was launched on southern Israel from the Palestinian enclave, Israel's army said. Israeli Defense Forces (IDF) stated that the overnight strike targeted militants' infrastructure in the north of the Strip.

Last summer was a disaster for the tiny coastal Gaza City on the Gaza Strip, as the Israeli air force along with troops pounded the city for weeks - the result of an accusation that Hamas launched terror attacks on Israel. During the four-week-long Gaza war, the Palestinian death toll from Israel's Gaza onslaught rose to 2,140, which were mostly unarmed civilians, according to the Palestinian Health Ministry. On the Israeli side, 73 people were killed, most of them soldiers. At least 425,000 displaced people in the Gaza Strip now live in emergency shelters, according to the U.N., and nearly 12,000 homes have been destroyed or partially damaged by Israeli air strikes, leading to worsening humanitarian conditions in the enclave.

Despite efforts to ease the Israeli siege on Palestinian territory, the effects of the Gaza war continue as Gazans are still in desperate need of medical and humanitarian aid, the report stated. During the 50-day-long Israeli offensive, Gaza's infrastructure was heavily damaged. Furthermore, a lack of fuel and the bombing of the strip's only power plant led to an electricity crisis in the city.
Last Update: Apr 24, 2015 11:24 pm
RELATED TOPICS