Al-Nusra bases allies with other groups on its own interests 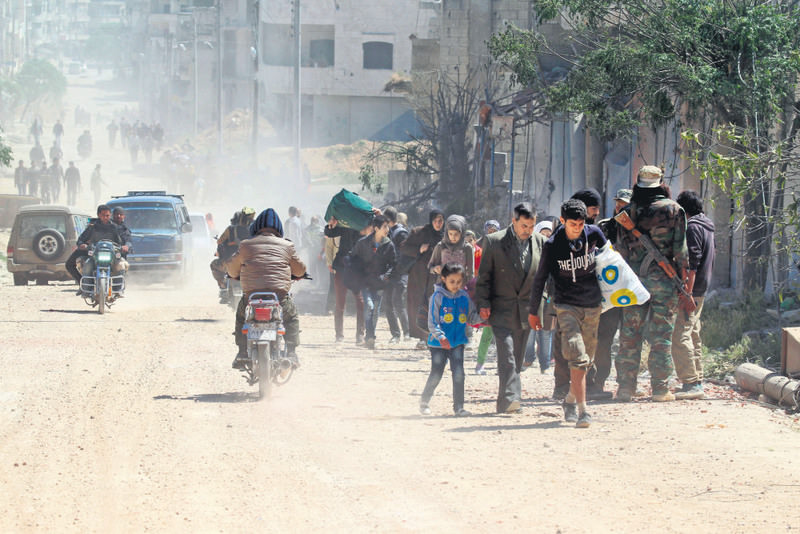 Civilians flee from Idlib after al-Nusra militants seized the city along with moderate opposition groups.
by Yusuf Selman İnanç Apr 26, 2015 12:00 am

The fact that al-Qaida-affiliated Nusra Front has started allying with ISIS and FSA, despite fighting the groups last year, could signify that the militant group is being pragmatic, based on conjuncture

Al-Qaida's official Syrian branch, al-Nusra Front, emerged as a decisive actor in the war against the Syrian regime as it was established in the middle of 2011 and has been carrying out effective attacks under the leadership of Abu Mohammad al-Julani, about whom there is limited information.

The organization not only fights against regime troops, but also other groups, including Islamic State of Iraq and al-Sham (ISIS). After ISIS, which was previously affiliated with al-Qaida, saw its operations in Iraq spill into Syria, al- Nusra Front denied its legitimacy and wanted the group to declare its obedience to Julani. ISIS rejected this demand and the two groups declared war on each other. ISIS dismantled itself from the globally established al-Qaida organization, which is recognized as a terrorist organization by a large number of countries, including the U.S., the EU and Turkey. After al- Nusra Front claimed that it was the only al-Qaeda branch in Syria ISIS denounced Nusra militants as apostates.

Despite disputes and clashes, an obvious rapprochement has emerged between the two groups after the U.S.-led anti-ISIS coalition launched airstrikes in September, as the coalition also hit al-Nusra targets with the aim of eradicating radical elements from the region. The two groups have ignored conflicting issues and unified their powers against the regime of Bashar al-Assad in certain areas. The latest example was the Yarmouk refugee camp where thousands of Palestinians are stuck between regime forces and opposition groups suffering from water and food shortages.

Last year al-Nusra Front fought against the FSA, whose members are moderate and aim to establish a democratic regime in Syria after the war. The Nusra Front and the FSA, which is the only legitimate opposition group according to Turkey, the U.S. and EU, have stopped fighting in certain areas and even improved cooperation in fighting regime forces. The biggest cooperation between FSA and al-Nusra Front appeared in the process of capturing Idlib from regime forces. Both groups fought together, but eventually al-Nusra Front issued a statement saying that the administration of the city will be in its own hands. In adverse, the armed factions known as the Southern Front, which introduces itself as a branch of the FSA, issued a statement regarding the presence of al-Nusra in Deraa.

Some activists claimed that despite the positive messages delivered by the Nusra Front about protecting civil rights and respecting different beliefs, the group's actions on the ground vary, implying that the Nusra Front's operations cannot simply be considered legitimate war activities. Some FSA members say on social media that al-Nusra Front acts quite pragmatically and allies with anyone, but never hands power over to others. The FSA is also disappointed with the group's cooperation with ISIS in certain areas as ISIS strictly denies the FSA's legitimacy and accuses it of serving U.S. interests.

The differing allying groups of al-Nusra Front has been described by some that the group is being pragmatic to achieve its targets. While ISIS has a global agenda, al-Nusra Front is making gains and expanding its control over its captured areas in Syria.

The Arab uprisings that euphorically swept across the Middle East and North Africa, attracted Syrians who had lived under the dictatorship of the Assad family since 1971, when current President Bashar Assad's father, Hafez, seized power. Since then the population was forced to live in a police state that tried to control every movement, organization or business through the use of a wide-ranging intelligence service.

In March 2011, Syrians were emboldened enough to raise their voices against the dictatorship. However, the regime's response was not as peaceful as the protests. And the country was subsequently dragged into a deadly civil war after opposition groups took up arms against the government. Opposition groups have also been divided internally. While moderate opposition groups like the Western-backed Free Syrian Army (FSA) are struggling for a democratic Syria where all religions and political groups are free to exist, radical elements like al-Nusra Front, and ISIS aims to establish a new Syria ruled by extremist religious jurisprudence.
Last Update: Apr 27, 2015 10:58 am
RELATED TOPICS