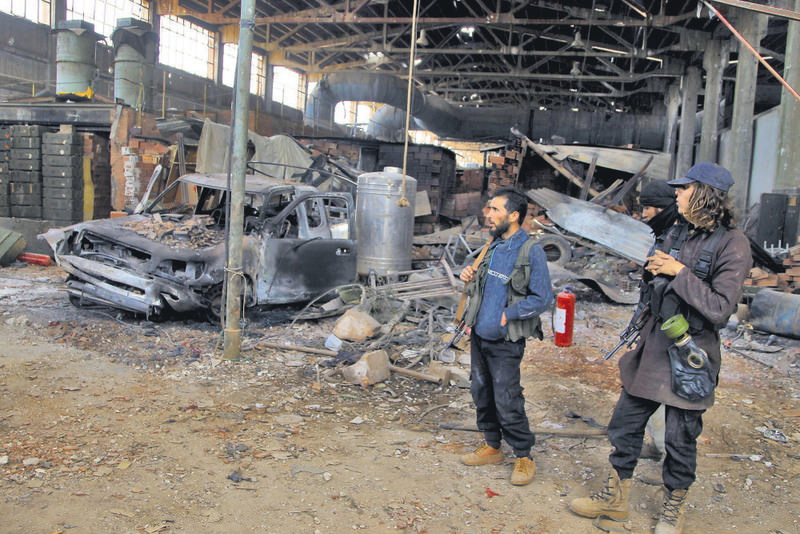 Rebels seized Qarmeed army base which is used by the regime forces to launch attacks on rebel-held towns.
by Daily Sabah with Reuters Apr 27, 2015 12:00 am

The Fatah Army, which includes al-Nusra Front and several other opposition groups, continues to make gains after fierce battles, despite airstrikes, in the south and moves toward Latakia, an Assad stronghold

A coalition of rebels seized an army base in northwestern Syria at dawn on Monday after a suicide bomber from al-Qaida's al-Nusra Front drove a truck packed with explosives into the compound and blew it up. The capture, reported by a rebel commander and social media videos showing militants inside the base, brought the coalition closer to seizing most of Idlib province and moving toward Latakia, the ancestral home of Syrian President Bashar al-Assad.

The army had been using the Qarmeed camp to shell rebel-held towns and villages in the strategic agricultural region bordering Turkey. Controlling it should help the rebels tighten their siege on the major Mastouma army base nearby. Syrian state media said the army killed scores of al-Nusra fighters and dozens of suicide bombers from Russia's Chechnya region in fighting near the base, but did not say the compound had fallen to the militants. "A truck with two tons of explosives penetrated one of the entrances of the camp that made it easier to take over the camp," Sheikh Husam Abu Bakr, a rebel commander from Ahrar al-Sham movement said via Skype.

The coalition of rebels includes Nusra, Ahrar al-Sham and Jund al-Aqsa, but not the rival Islamic State of Iraq and al-Sham (ISIS) that controls large swathes of Syria and Iraq. The Syrian Observatory for Human Rights, which collects information from both sides of the conflict, said two suicide bombers blew themselves up at the gates of the camp. "This was one of the major bases of the regime in Idlib and had lot of weapons," said Observatory head Rami Abdul Rahman, adding at least seven tanks, large ammunition caches and scores of rocket launchers were seized by the rebels.

The Observatory said 73 people, many of them women and children, were killed in retaliatory raids on civilian homes and markets in rebel-held towns and villages in the last 24 hours. At least 53 civilians were killed in air force bombing in the town of Darkoush northwest of Idlib when the air force bombed a busy market place and a center where displaced refugee were taking cover, it said.

Al-Qaida's official Syrian branch, al-Nusra Front, emerged as a decisive actor in the war against the Syrian regime as it was established in the middle of 2011 and has been carrying out effective attacks under the leadership of Abu Mohammad al-Julani, about whom there is limited information. The group led the capture of Idlib and other key towns near Jordanian border.
Last Update: Apr 28, 2015 10:38 am
RELATED TOPICS