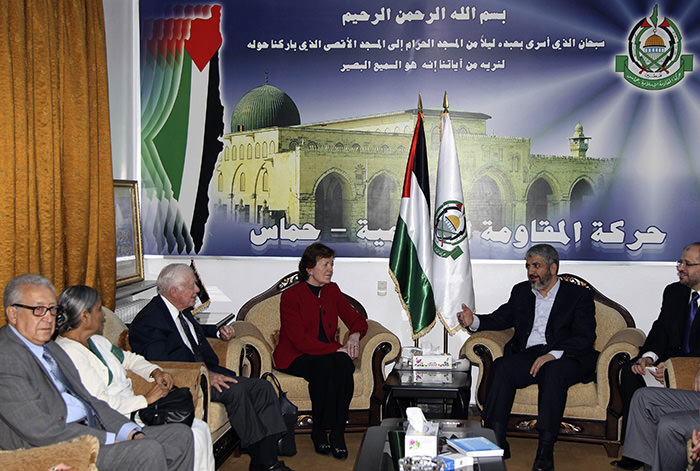 "Carter will arrive in Gaza on Thursday through the Erez border crossing to meet with leading Hamas officials," a Palestinian security source, requesting anonymity, told AA.

Carter is scheduled to arrive in Gaza on April 30 and meet with Hamas leaders and then meet with Palestinian Authority President Mahmoud Abbas, the Jerusalem Post reported Monday.

Israel has officially decided to boycott Carter's visit: "There are no negotiations with Hamas," said Ahmed Yousef, a senior Hamas official, according to the Jerusalem Post.

As a peace negotiator in the Arab-Israeli conflict, Carter has been one of the most successful regarding his contributions among U.S. politicians.

"There is no humane or legal justification for how the Israeli Defense Force is conducting this war, pulverizing with bombs, missiles and artillery large parts of Gaza, including thousands of homes, schools and hospitals, displacing families and killing Palestinian non-combatants," a Guardian newspaper article penned by Carter and Mary Robinson in August 2014 asserted.

His firm stance regarding Israel's treatment of Palestinians and their policies on occupied territory has attracted strong criticism, including accusing him to be anti-Semitic.

Carter, who was awarded the 2002 Nobel Peace Prize for his contributions to peace promoting in international conflicts, previously visited the Gaza Strip in 2009 and held several meetings with leading Hamas figures.

In June 2014, three Israeli teenagers went missing and Israel attacked Gaza, after they were found to have been murdered. In retaliation, a Palestinian teenager, Muhammad Abu Khdeir, was burned to death as revenge by far-right extremist Israelis.

The Israeli attack on the West Bank was responded to by Hamas. In July 2014, Israel launched Operation Protective Edge, a full fledge attack on Gaza City, killing more than 2,000 civilians, injuring more than 10,000 and destroying the city.

Israel continues to increase the number of settlements on occupied territory, despite criticism from the U.S., U.N. and other international human rights organizations. Furthermore, since the cease-fire of August 2014, Israel has attack Gaza 400 times, whereas only four rockets have reportedly been fired into Israel.
Last Update: Apr 27, 2015 3:43 pm
RELATED TOPICS