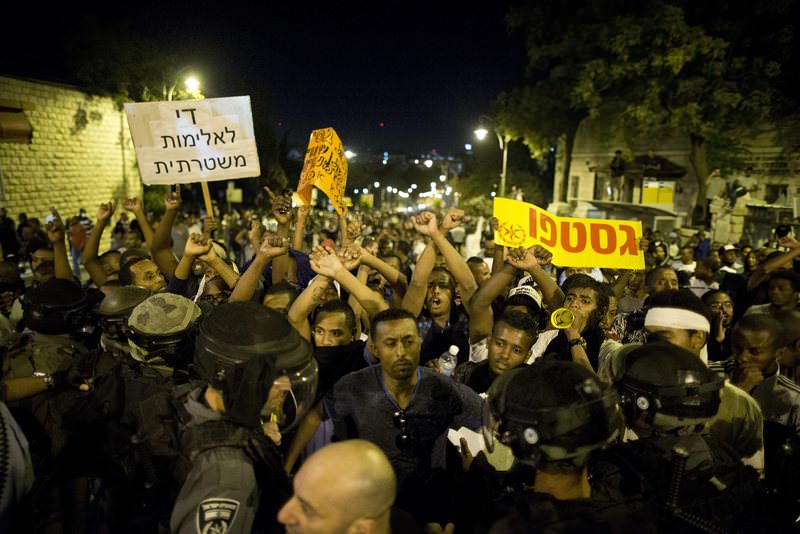 by May 01, 2015 12:00 am
A demonstration by Israeli Jews of Ethiopian origin against police brutality turned violent on Thursday, with police using water canon to keep the crowd away from the prime minister's residence.

At least 13 people were injured and two police officers and five protesters were taken to hospital, the Magen David Adom ambulance service said.

Police fired bursts of foul smelling water from a water canon and used stun grenades to disperse the demonstrators, who threw stones and bottles at scores of police officers on hand.

The demonstration, that began as a peaceful march near national police headquarters in East Jerusalem, was called after a video clip emerged showing two police officers assaulting an Ethiopian army conscript and arresting him.

Among the protesters' banners were one reading "Enough to police violence" and "Gestapo" with an Israeli police emblem next to it. Protesters chanted "the police are a disgrace!"

"We are demonstrating against police brutality, the police are using disproportionate force against Israeli-Ethiopian civilians and there are many cases where they have been beaten by the police," protester Avi Tesema told Reuters.

Israel's community of Ethiopian Jews numbers about 120,000, out of a population of over 8 million. They began moving to Israel after chief rabbis determined in 1973 that the community had biblical roots.

Prime Minister Benjamin Netanyahu issued a statement condemning the violence against the soldier and calling for calm.

The U.S. Consulate General, situated near the unrest, was not under threat at any stage, police spokesman Micky Rosenfeld said.