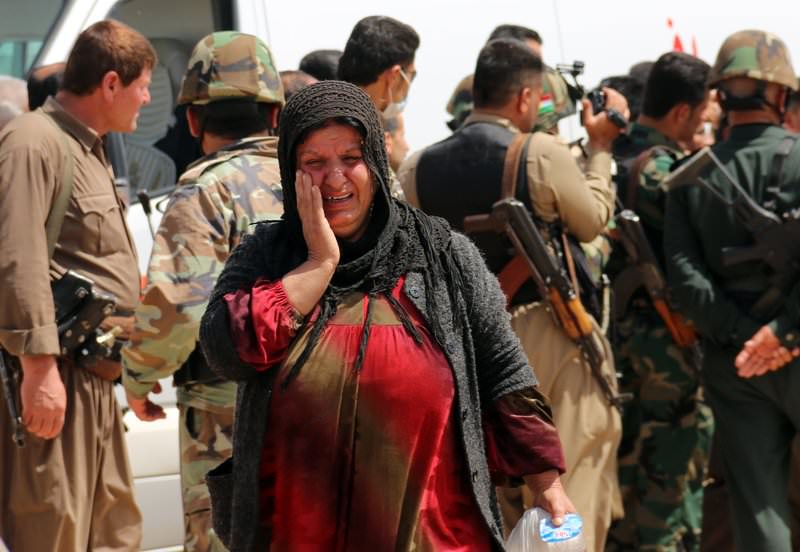 A Yazidi woman, released by ISIS, reacts upon her arrival in the village of al-Humeira, 35 kms southwest of Kirkuk, on April 8, 2015 (AFP Photo)
by May 02, 2015 12:00 am
The self-proclaimed Islamic State of Iraq and al-Sham (ISIS) has exeucted more than 300 captive members of Iraq's Yazidi community, a Yazidi political party said on Saturday.

The Yazidi Progress Party is quoted by the Iraqi news website Shafaq News as saying the alleged killings were carried out on Friday in the town of Tal Afar near the ISIS-controlled northern city of Mosul.

The allegations could not be independently verified.

The Yazidis are regarded by ISIS as infidels.

In December, Kurdish Peshmerga forces ended a months-long siege by ISIS on the mostly Yazidi town of Sinjar in north-western Iraq.

Several mass graves have since been found in the area containing remains of Yazidis believed to have been executed by the extremist group.

Iraqi government troops, backed by local paramilitaries and US-led airstrikes, have in recent months stepped up fight to dislodge the militants from their northern and western strongholds.
ISIS also controls a large amount of territory in neighbouring Syria.

A monitoring group reported on Saturday that at least 52 civilians, including seven children, were killed in US-led airstrikes against extremists in northern Syria.

In September, the United States and allied Arab countries started an air campaign against ISIS facilities in war-torn Syria.