UNRWA calls for protection of civilians in Yarmouk camp in Syria 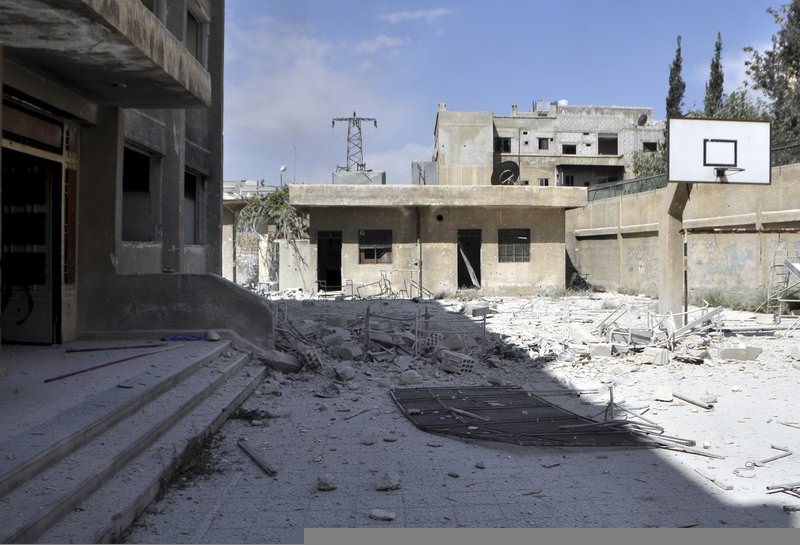 A view of the damage at a school, after what activists said were eight barrel bombs thrown by forces loyal to Syria's President Bashar Al-Assad, in Yarmouk camp April 14, 2015 (Reuters Photo)
by Daily Sabah with AA May 02, 2015 12:00 am
The UN agency for Palestinian refugees (UNRWA) on Saturday called for protection of civilians in the Palestinian Yarmouk refugee camp, southern Syrian capital Damascus.

The agency called on the Syrian regime to suspend dropping barrel bombs on the camp, expressing concern over the safety of civilians there.

UNRWA also called on militant groups in the camp to protect civilians in the light of international law.

They add that the attacks contributed to making deteriorating humanitarian conditions in the Yarmouk camp even worse.

Militants affiliated with Daesh-a militant group that has overrun vast territories in both Iraq and Syria-entered the camp in early April, which opened the door for clashes between them and Aknaf Beit al-Maqdis, another militant group present in the camp.

International humanitarian organizations say they are in capable of offering aid to around 18,000 residents of the camp as clashes rage on between the two militant groups.

Syria has been ravaged by a deadly civil war since 2011, when the regime of President Bashar al-Assad violently cracked down on anti-government demonstrations.

More than 220,000 people have been killed in the conflict to date, according to the latest UN figures.

Prior to the conflict, Palestinians living in Syria were estimated at some 581,000-one third of whom had been living in the Yarmouk camp, according to the UN.

In recent years, however, as the conflict between Assad's forces and armed opposition groups raged on, thousands of Palestinians in Syria have fled to neighboring Lebanon and Jordan, while hundreds of others have fled to the Gaza Strip.

Around 166 Palestinian refugees starved to death in mid-2013 when Syrian regime forces besieged the Yarmouk camp.
Last Update: May 03, 2015 12:06 am
RELATED TOPICS