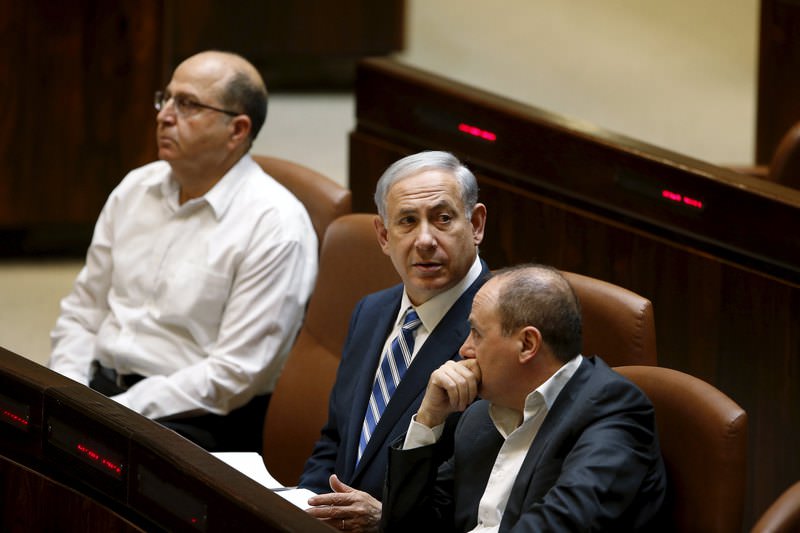 by Associated Press May 06, 2015 12:00 am
Israeli Prime Minister Benjamin Netanyahu completed the formation of a new coalition late on Wednesday, putting him at the helm of a hard-line government that appears to be set on a collision course with the U.S. and other key allies.

Netanyahu reached a deal with the nationalist Jewish Home party shortly before a midnight deadline, clinching a slim parliamentary majority and averting an embarrassing scenario that would have forced him from office. But with a government dominated by hard-liners that support increased West Bank settlement construction and oppose peace moves with the Palestinians, he could have a hard time rallying international support. Controlling just 61 of 120 parliamentary seats, the narrow coalition could also struggle to press forward with a domestic agenda.

After Netanyahu's Likud Party won March 17 elections with 30 seats, it seemed he would have a relatively easy time forming a coalition and serving a fourth term as prime minister. But the six-week negotiating process, which expired at midnight, turned out to be much more difficult than anticipated as rival coalition partners and members of the Likud jockeyed for influential Cabinet ministries.

He vowed to install "a strong and stable government for the people of Israel" by next week, yet also hinted he would court additional partners in the near future.

The coalition talks stalled this week when Foreign Minister Avigdor Lieberman, a longtime partner of Netanyahu's, unexpectedly stepped down and announced his secular nationalist Yisrael Beitenu party was joining the opposition.

That left Netanyahu dependent on Jewish Home leader Naftali Bennett, a former aide who has a rocky relationship with Netanyahu. With Bennett driving a hard bargain, the talks stretched throughout the day and well into the night before Netanyahu called President Reuven Rivlin, as required by law, to announce the deal.

"I congratulate you on completing the formation of the government. I have received your letter of confirmation, and look forward to the convening of the Knesset as soon as possible, to approve the government," Rivlin said.

Netanyahu had until midnight to speak to Rivlin. Otherwise, the president would have been required to ask another politician to try to form a government.

Analysts do not expect the new government to last long or accomplish much.

Opposition leader Isaac Herzog, head of the centrist Zionist Union, called the coalition "a national failure government." He said it was "an embarrassing farce" and "the narrowest in Israel's history."

During the campaign, Netanyahu angered the White House when he said that he would not allow the establishment of a Palestinian state on his watch.

Although he has tried to backtrack, the White House has reacted with skepticism. Netanyahu's Likud Party is dominated by hard-liners opposed to Palestinian independence, a position that is shared by the Jewish Home. The odds of peace talks restarting much less making any progress appear slim.

The Jewish Home's close ties with the settler movement mean that there will likely be great pressure on the new government to expand construction on occupied lands.

The international community overwhelmingly opposes settlement construction, and the Palestinians are trying to push forward with a war crimes case against the settlements at the International Criminal Court in the Hague. U.S. officials have said they could have a hard time defending Israeli policies if the government isn't committed to a two-state solution with the Palestinians.

The new government could also struggle at home. Under the coalition deal, the Jewish Home gained control of the influential Education and Justice Ministries. The incoming justice minister, Ayelet Shaked, is an outspoken critic of the country's judiciary and is expected to seek a greater voice in the appointment of judges.

Meanwhile, Netanyahu's ultra-Orthodox partners, Shas and United Torah Judaism, are bent on reversing reforms passed by the last government.
Those reforms sought to end an unpopular system that granted the ultra-Orthodox exemptions from compulsory military service, welfare subsidies to study full-time instead of entering the work force and generous budgets for a religious school system that largely ignores key subjects like math, English and computer studies.

These longstanding benefits have bred widespread resentment among the secular majority. Wiping out the reforms is likely to generate renewed public anger.

"A narrow, suspicious and sectoral government is on its way," he said, vowing to "do everything" to stop "the clearance sale of the country" to parties with narrow interests.

Netanyahu's last partner, Kulanu, is a centrist party focused on bringing relief to Israel's struggling middle class. Although in control of the Finance Ministry, the party could struggle passing reforms due to the slim parliamentary majority.