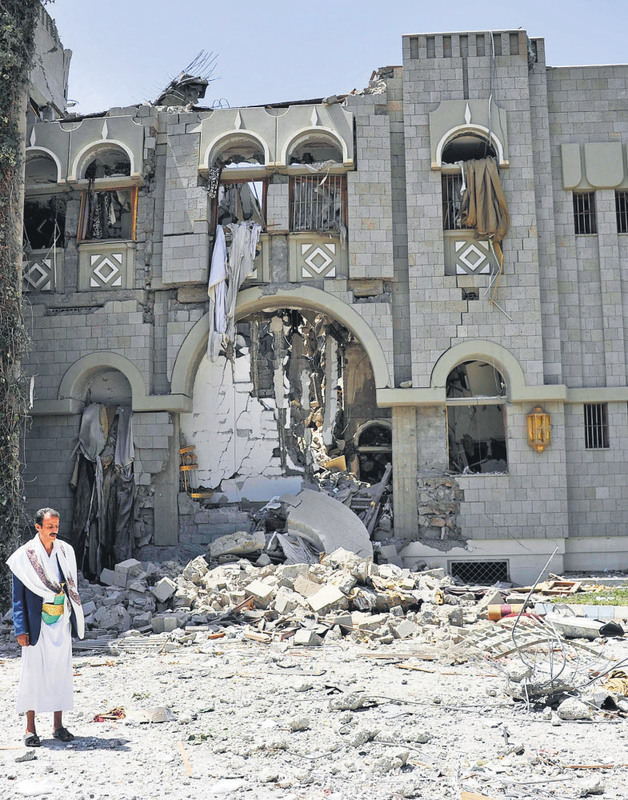 Yemenis suffer from the destruction of hundreds of buildings in the capital, Sanaa, after Saudi-led coalition strikes.
by Daily Sabah with Wires May 10, 2015 12:00 am

Iran-backed Shiite Houthi rebels have declared that they accepted the 5-day truce, proposed by Saudi Arabia after the coalition strikes intensified and left the rebels trapped and inactive

Iranian-allied Houthi fighters in Yemen accepted on Sunday a five-day humanitarian cease-fire proposed by their adversary Saudi Arabia but said they would respond to any violations. Neighboring Saudi Arabia had said on Friday that the cease-fire could begin on Tuesday if the Houthi militia agreed to the pause, which would let in desperately needed food and medical supplies. Backed by the United States, a Saudi-led coalition has been conducting air strikes against the Houthis and army units loyal to ex-president Ali Abdullah Saleh.

Backed by the United States, a Saudi-led coalition has been conducting air strikes against the Houthis and army units loyal to ex-president Ali Abdullah Saleh since March 26 with the aim of restoring the government of President Abd-Rabbu Mansour Hadi. Colonel Sharaf Luqman, spokesperson for the Houthi-allied army, said on Sunday that Yemeni forces had agreed to the truce but would confront any attacks by Hadi loyalists on battlefronts which stretch across much of the impoverished country. The Houthis say their campaign is aimed at defeating al-Qaida militants based in Yemen and accuse Hadi's forces of supporting the group. "Any military violation of the ceasefire from al Qaeda and those who stand with it ... will be responded to," Luqman said in a statement published by Saba news agency.

Arab air strikes and heavy shelling on Sunday rocked the southern city of Aden, the epicenter of fighting for more than six weeks, and southern fighters questioned the proposed pause. "We doubt that the Houthis would stick to a ceasefire or truce because they have repeatedly broken political commitments they have made in the past," a pro-Hadi militiaman in the city told Reuters. The Houthis' acceptance of a truce came as Saudi ground forces conducted air strikes, fired artillery and launched at least two dozen rockets on Saada province, a Houthi stronghold along its southern border. Riyadh has called on civilians to evacuate the province, in a move that has drawn criticism from the United Nations.

"The indiscriminate bombing of populated areas, with or without prior warning, is in contravention of international humanitarian law," the U.N. Humanitarian Coordinator for Yemen Johannes van der Klaauw said in a statement. "Many civilians are effectively trapped in Saada as they are unable to access transport because of the fuel shortage. The targeting of an entire governorate will put countless civilians at risk."

International concern about the humanitarian situation has grown as the strikes have killed more than 1,300 people, sent locals fleeing from their homes and destroyed infrastructure, leading to shortages of food, medicine and fuel.

Residents in the capital Sanaa reported that Arab planes bombed for a second day in a row the vast compound which is home to ex-president Saleh, a key player in Yemen's political crisis whose loyalists in the army fight on the Houthis' side. In a sign that the wily political operator was unscathed, Saleh blasted the Saudi-led campaign on his official Twitter account on Sunday. "Look for a solution to exit from your quagmire of killing and destroying the Yemeni people. Stop drinking Yemeni blood and let us solve our differences," he wrote. Saleh and the Houthis have asked for a U.N.-backed political dialogue, but their opponents say they have yet to make any concessions and have called for them to end their military push on Aden and Yemen's south.

After the truce was declared, an Iranian cargo ship will set sail for the rebel-held Yemeni port of Hodeida on Sunday evening, Iran's Tasnim news agency said, in a move likely to fan further tensions with Saudi-led forces blockading the country. Tasnim reported that the cargo ship would carry 2,500 tons of humanitarian aid including food staples and medicine. Saudi Arabia and its Arab allies have accused Iran of seeking to smuggle weapons and ammunition to the Houthis and have imposed a sea and air blockade on Yemen. Coalition jets destroyed the runway of Sanaa airport last month to prevent an Iranian plane from landing. Tehran said it was carrying aid. Yemen imports more than 90 percent of its food and aid agencies have warned of a humanitarian catastrophe.

Yemen's slide toward civil war has made the country a crucial front in mostly Sunni Saudi Arabia's rivalry with Shiite Iran, which Riyadh accuses of stirring up sectarian strife through its support for the Houthis. Sunni Arab monarchies around Yemen have condemned the Shiite Houthi takeover as a coup and have proposed a military intervention in favor of Abd Rabbuh Mansur Hadi in recent days. The advance of the Iranian-allied Shiite Houthi group raises fears of the possible disintegration of the country.

Sanaa has been under Houthi rebel control since September last year. The country has been facing severe political instability after the takeover of the presidential palace by Houthi militants, prompting Hadi to tender his resignation. Hadi fled to the southern port city of Aden, where he has re-established his presidency. As the country continues to be dragged into civil war, the U.N. has started to hold mediated peace talks between Houthis and Hadi's government in a bid to bring peace and stability back to the country.
Last Update: May 11, 2015 11:05 am
RELATED TOPICS