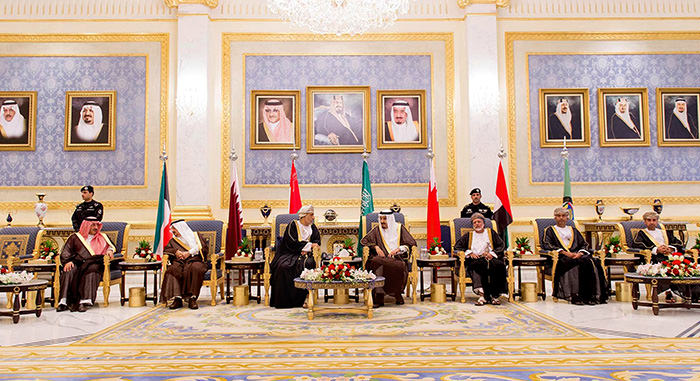 |AP Photo
by Anadolu Agency May 11, 2015 12:00 am
Saudi Arabia's King Salman bin Abdulaziz on Sunday delegated Crown Prince Nayef bin Abdulaziz to attend a U.S.-Gulf summit that will be held in the U.S. later this week.

Prince Nayef will lead the Gulf state's delegation at the two-day summit, which will kick off on Thursday, Saudi Foreign Minister Adel al-Jubeir was quoted as saying by the official Saudi news agency.

Al-Jubeir said King Salman would not attend the summit due to his preoccupation with the ongoing military campaign against Yemen's Shiite Houthi militant group, which Saudi Arabia and several Gulf-Arab allies launched in late March.

"King Salman is keen on achieving peace and security in Yemen and on ensuring that the Yemeni people are receiving urgent humanitarian aid," al-Jubeir said.

U.S. President Barack Obama is scheduled to receive the leaders of the six-member Gulf Cooperation Council in the White House and in Camp David on May 13 and May 14 respectively to discuss means of "deepening security cooperation," according to a recent statement by the White House.

On Sunday, Kuwaiti Emir Sheikh Sabah al-Ahmad al-Sabah left his country on the way to the U.S. to attend the summit.

Qatar said also that its Emir Sheikh Tamim bin Hamad al-Thani will travel to the U.S. on Monday to attend the summit.

Nevertheless, Saudi Arabia and Bahrain said that their crown princes would lead their countries' delegations in the summit.

Oman also said that its deputy prime minister will lead his country's delegation in the summit.

The United Arab Emirates has not declared whether its president will attend the summit.

UAE President Khalifa bin Zayed Al Nahyan has not been part of any official activities since Jan. 24, 2014 for health reasons.

The summit will discuss means of "deepening security cooperation," between the U.S. and Gulf states, according to a recent statement by the White House.

U.S. Secretary of State John Kerry said on Friday that the fight against terrorism and Iran would be among the topics that would be discussed during the summit.

Fractious Yemen has remained in turmoil since last September, when the Houthis overran capital Sanaa, from which they sought to extend their influence to other parts of the country.

Riyadh says its air campaign comes in response to appeals by Yemeni President Abd Rabbuh Mansour Hadi for military intervention against the Houthis.