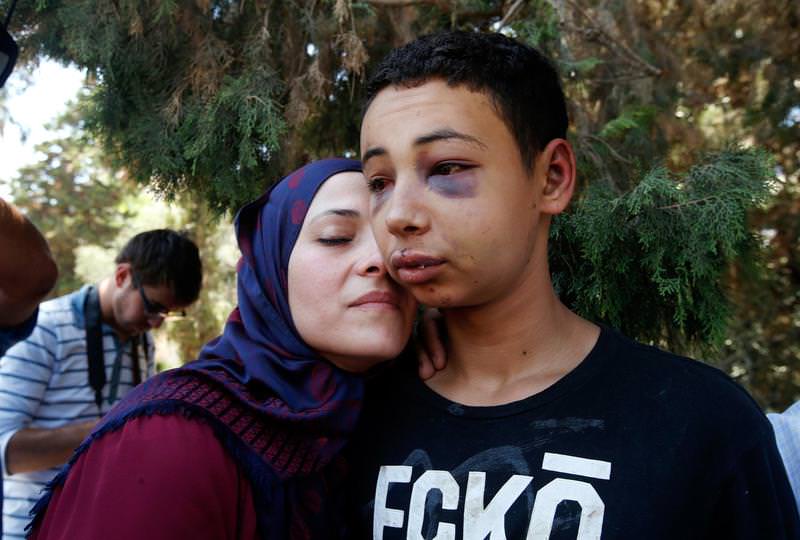 by Daily Sabah May 11, 2015 12:00 am
The Palestinian-American teenager Tariq Abu Khdeir, who was beaten unconscious by Israeli authorities last summer in East Jerusalem, met with White House National Security Council staffers prior to his return to Shuafat neighborhood of Jerusalem, CNN reported on Monday.

The 16-year-old Khdeir was beaten during a demonstration commemorating the killing of his cousin Mohammed last summer. A video that caught the assault on Tariq showed the Israeli police officers kicking and punching him on the head and upper body even though he was clearly not resisting arrest.

Photographs taken shortly after the beating show him with a swollen and bloodied face, barely recognizable from photos taken before the assault.

According to the CNN report, White House officials confirmed that they have met the Abu Khdeir family on April 15 as they were preparing to return this summer to visit other relatives in the Shuafat neighborhood of Jerusalem.

"We are working with Israeli authorities and expect to receive a meaningful answer from the investigation into the American citizen's death in Silwad in October," a senior administration official said, referring to Orwa Hammad, 14, a Palestinian American killed by Israeli Defense Forces on October 24.

The official also said that the White House was "concerned also by the arrest and detention of several American citizen minors in recent months, including most recently Abdallah Abdo in Jerusalem who told us he had been severely beaten while in police custody, as was American citizen Tariq Khdeir in July. Our consular team observed injuries on Mr. Abdo that appear consistent with his version of events. If accurate, we strongly condemn such excessive use of force.", CNN reported.

Last year after arriving in the U.S. , Tariq and his mother said that his status as an American citizen helped focus the world's attention on his treatment and the brutal killing of his cousin Mohammed.

Mohammed was abducted from the East Jerusalem neighborhood of Shuafat on July 2 by suspected right-wing Israeli extremists and taken to a forest outside Jerusalem where his body was discovered. A preliminary autopsy report showed that he had been burned alive.

His murder, and the earlier kidnap and killing of three Israeli teenagers, led to an escalation in tensions between Israel and Palestine that culminated in the Israeli attacks on Gaza on July 7, resulting in nearly 1,900 deaths.