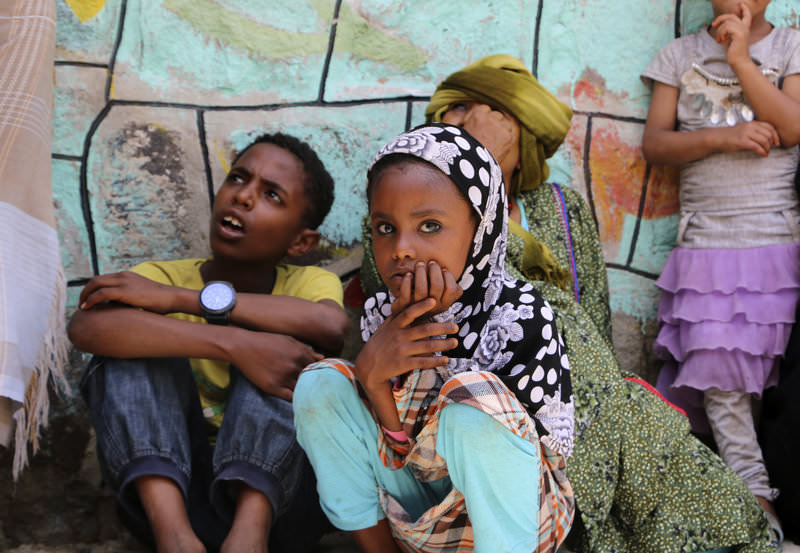 In this Saturday, May 9, 2015 file photo, displaced families who fled fighting in the southern city of Aden wait for relief supplies during a food distribution effort by Yemeni volunteers, in Taiz, Yemen (AP Photo)
by Daily Sabah with AA May 12, 2015 12:00 am
A five-day ceasefire started in Yemen on Tuesday after 48 days of Saudi-led airstrikes against Shiite Houthi rebels.

The cease-fire was suggested by Saudi Foreign Minister Adel al-Jubeir and U.S. Secretary of State John Kerry during the latter's visit to Saudi Arabia this week.

The truce makes it necessary for the Houthis to abide by a cease-fire in all Yemeni provinces.

Fractious Yemen has remained in turmoil since last September, when the Houthis overran the capital Sanaa, where they sought to extend their influence to other parts of the country.

Riyadh says its air campaign comes in response to appeals by Yemeni President Abd Rabbuh Mansour Hadi for military intervention against the Houthis.

The Houthis, meanwhile, denounce the offensive as an unwarranted "Saudi-American aggression" on Yemen.
Last Update: May 13, 2015 10:24 am
RELATED TOPICS