Obama speaks to Saudi king amid claim of summit snub 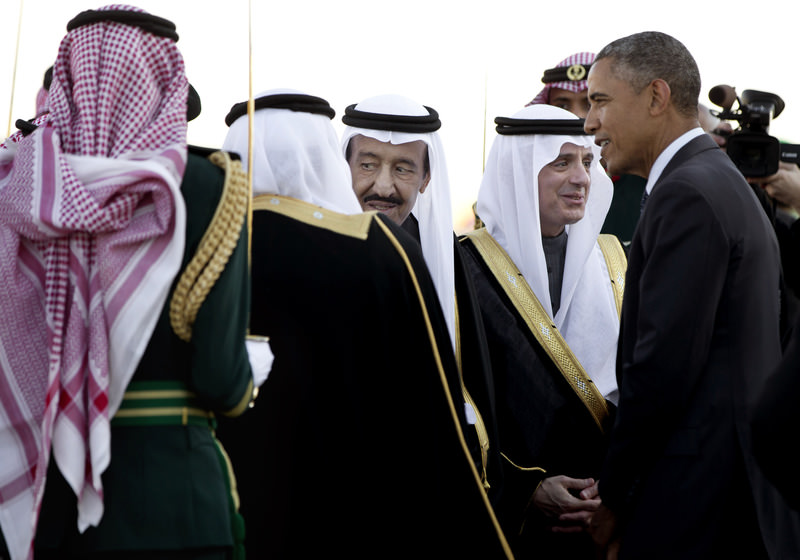 by May 12, 2015 12:00 am
The White House and Saudi Arabia scrambled to quell talk of a diplomatic rift Monday, after King Salman pulled out of a summit with President Barack Obama at the eleventh hour.

Senior US and Saudi officials appeared in public to insist the Gulf royal's decision was not a snub nor part of a deeper crisis in never-easy ties that date back decades.

Obama had invited six Gulf leaders to the presidential retreat, amid suspicions that Washington is no longer committed to their security and is not doing enough to stop Iran's destabilizing actions across the region.

The US president has warned the deeply conservative monarchies that they must reform, and has launched nuclear talks with their arch-foe Iran.
With just days before Wednesday's meeting at the White House and Thursday's gathering at Camp David, Riyadh said it would instead send Crown Prince Mohammed bin Nayef and the King's influential son Mohammed bin Salman.

"This is not related in any way, shape or form to any disagreement between the two countries," said Saudi Foreign Minister Adel al-Jubeir, saying the King would stay at home to deal with unrest in Yemen.

"I think this idea that this is a snub because the king did not attend is really off base. This is an extremely high level delegation. It has absolutely the right people to represent the Kingdom."

Jubeir also dismissed suggestions that King Salman had been forced to cancel the visit due to long-rumored ill health.

"The King's health is excellent, thank God," he said.

The White House, meanwhile, announced that Obama and Salman had spoken by telephone, as the US too tried to downplay differences.
White House spokesman Josh Earnest rejected claims Riyadh was trying to send a message.

"If so, that message was not received," he said. "The travel plans are completely unrelated to the agenda that's planned for Camp David."

Beneath the surface, however, there is deep unease at what US allies perceive as Washington's disengagement in the region under Obama's administration.

There is also worry that a nuclear deal with Iran could unfreeze tens of billions of dollars that Tehran could use to buy weapons or augment support for proxy groups.

"Underlying all of this is how do we confront Iran's interference in the affairs of the countries of the region," said Jubeir.

"We see Iran facilitating terrorist organizations, so the challenge is how do we collectively in the GCC and the US coordinate our efforts tin order to counter these oppositive moves."

Some Gulf states had pressed for the summit to lead to a written guarantee that the US would come to their defense, something US officials rebuffed.

But instead the summit is likely to result in more modest commitments to joint maritime security, a promise to study regional ballistic missile defense and a review to speed up weapons transfers.

The Saudis "felt there was no substance to what had been proposed," said Bruce Riedel, a long-time White House and intelligence operative now with the Brookings Institution.

"It's hard not to look at this as a snub," agreed Lori Plotkin Boghardt a former CIA analyst now at the Washington Institute for Near East Policy.

But experts said that in Crown Prince Nayef and Salman's son -- the minister of defense who is seen as a possible ruler and often known as "MbS" -- the two biggest players in Saudi Arabia would be at the summit.

"This is a great opportunity for the Americans to get to know MbS," said Plotkin Boghardt. Nayef is a "known quantity in Washington but MbS is still a mystery," she added.
Last Update: May 12, 2015 10:46 am
RELATED TOPICS