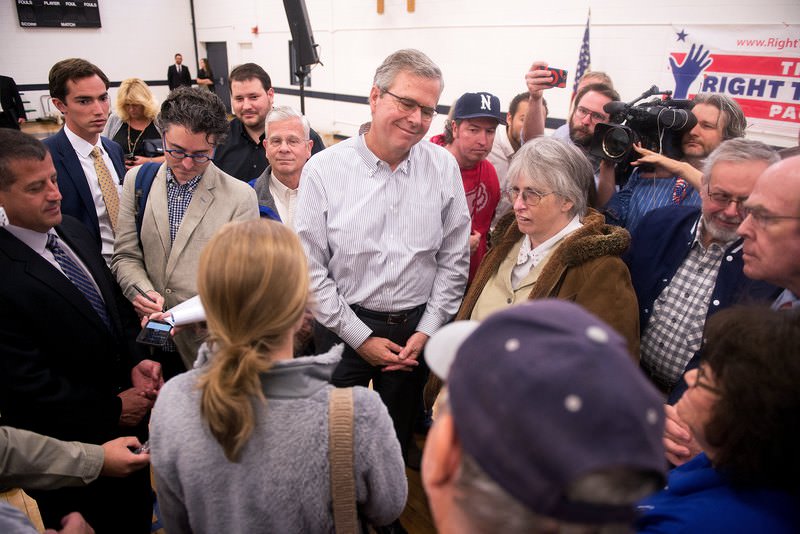 by Daily Sabah May 14, 2015 12:00 am
The former Florida governor and potential Republican presidential candidate Jeb Bush was confronted by a 19-year-old college student on Wednesday, after she told Bush, "Your brother created ISIS."

At the hall event in Nevada, Bush blamed U.S. President Barack Obama for the unrest in the Middle East and claimed that the U.S. president contributed to the growing power of the ISIS by withdrawing the U.S. army from the region.

After his speech the college student, Ivy Ziedrich, asked Bush, "Why are you saying that ISIS was created by us not having a presence in the Middle East when it's pointless wars where we send young American men to die for the idea of American exceptionalism? Why are you spouting nationalist rhetoric to get us involved in more wars?"

"We respectfully disagree. We have a disagreement. When we left Iraq, security had been arranged, Al Qaeda had been taken out. There was a fragile system that could have been brought up to eliminate the sectarian violence," Bush replied.

"Look, you can rewrite history all you want, but the simple fact is that we're in a much more unstable place because America pulled back," he added.

The Bush family's legacy of unrest in the Middle East seems to cause some problems for Jeb Bush's upcoming election campaign as Democrats accuse Jeb's brother, former President George W. Bush, of giving rise to the current turmoil in the region with the U.S. led invasion of Iraq. The prolonged conflict damaged George W. Bush's second term and his popularity. Twelve years earlier Jeb's father, former President George H.W. Bush, assembled a global coalition to push Iraq out of Kuwait, a swift war that was far more popular at home.
Last Update: May 15, 2015 11:04 am
RELATED TOPICS