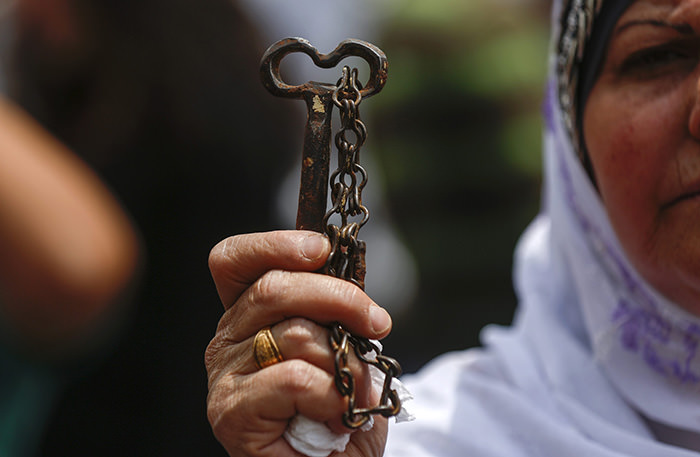 Sixty-seven years ago Israelis displaced Palestinians from their homeland which is marked by Nakba Day. But Israeli aggression on Palestinians has not come to an end as Palestinians are still periodically displaced

Palestinians commemorate Nakba Day – Yawm an-Nakba in Arabic – meaning the 'Day of Catastrophe,' marking Israel's occupation of the Palestinian territories following the Israeli Declaration of Independence on May 14, 1948. Israel's occupation, which they justified as reclaiming their right to live in their native lands, led to the forceful displacement of nearly one million Palestinian from the lands they had called home for centuries.

Nakba Day is remembered for the tragedy that occurred during the expulsion of the Palestinians from their homes, creating an influx of refugees, and Israeli violence, which included the massacre of nearly 15,000 Palestinian people. This date also marks the beginning of the multifaceted and complex Arab-Israeli conflict, perhaps one of the most significant turning points for the people and the politics of the Middle East in the last century.

In the early 1920s of the Mandate Palestine, according to British sources, the Jewish population was nearly 84,000. However, through immigration from Europe, the population of Jews increased from 11 percent of the total population to 31 percent by the early 1940s, causing a natural clash between the Arab Palestinians and the Jewish settlers. Although the U.N. proposed a two-state solution, it did not succeed because the two sides could not agree on terms.

As the clashes turned into a larger conflict, Britain decided to leave Palestine and on May 14, 1948, they handed it over to the Zionists settlers from Europe as a new place for settlement, which they named the state of Israel. Despite the rejection of the new state by neighboring Arab states, and their attempts to invade Israel, the Zionist settlers invaded larger parts of Palestine. As a result of the clashes, Israel took control and depopulated almost 800 towns and villages throughout Palestinian lands, which had been governed by the British Mandate. They declared their independence and forcefully drove out nearly 67 percent of the Palestinian population from their homes.

Nakba Day, as it is known today, was first commemorated on May 15, 1998, by the Palestinian Liberation Organization (PLO) leader Yasser Arafat, calling all Palestinians to mourn for the events during the First Intifada. This year was also the 50th anniversary of Israel's Declaration of Independence.

Prior to 1948, the Nakba, had referred to the partitioning of the Middle East by the European imperialist powers after the collapse of the Ottoman Empire in 1920. Despite the 'catastrophe' in 1948, the term was not initially adopted by the Palestinians to mark the tragedy in 1948, since they never believed that the expulsion from their homes was a permanent one, for many years calling themselves 'returnees.' They resisted using the term Nakba but instead used the Arabic terms for 'the rape', 'the events', or 'the exodus' until the 1970's. Many of the Palestinian 'returnees' kept 'house keys' imagining a return to their home, which later became a symbol for their struggle. But instead of the hoped-for return, 'the returnees' have become the 'permanent refugees' of the world. The Israeli regime has denied the rights of Palestinian refugees to return to the lands where they had lived in for centuries, despite U.N. resolutions and international law.

Data released by the Palestinian Central Bureau of Statistics on May 12 recorded a Palestinian population of 12.1 million people worldwide. Only 4.6 million live in the occupied territories of the West Bank and Gaza Strip, of whom 43.1 percent are internally displaced people, and the remainder 7.5 million live in exile, most of them in UN-installed refugee camps in surrounding Arab states. According to the United Nations Relief and Works Agency for The U.N. Relief Agency for Palestinian Refugees in the Near East (UNRWA) has 5.49 million Palestinians registered in its books.

Almost 70 years since the conflict erupted, the repercussions of the Nakba continue for Palestinians who are now stateless people and permanent refugees as a result of Israel's policies. Rather than being a historical fact, the Nakba has become a daily routine for Palestinians living in the catastrophic conditions imposed by Israel.

Despite pressure from the U.N., U.S., EU and the international community for its historic crimes and daily inhumane treatment of Palestinians, including imposing a blockade on Gaza, building illegal settlements on the Palestinian territories and periodically attacking and killing civilians, the politics of denial have become an attribute of Israeli politics. Most recently in July 2014, Israel launched a fully-fledged attack on Gaza, killing more than 2,500 civilians and destroying many structures in Gaza. In addition, Israel continues to build illegal settlements in the occupied territories, most recently building 450 settlements authorized in late 2014 and another 950 in early May 2015.

Nakba Day, which was officially sanctioned by Israel in 2011, is commemorated with a series of international events by Palestinians and the international community sharing the struggle of the permanent refugees, including anti-occupation speeches and rallies by Palestinians in Israel, the West Bank and Gaza, in Palestinian refugee camps in the Middle East and in other places around the world. Israel imposes harsh penalties on organizations for mourning the Israeli Independence Day. The Israeli Defense Forces (IDF) often respond to the demonstrations with force, resulting in clashes between the IDF and Palestinians and often leading to casualties.
Last Update: May 14, 2015 9:39 pm
RELATED TOPICS