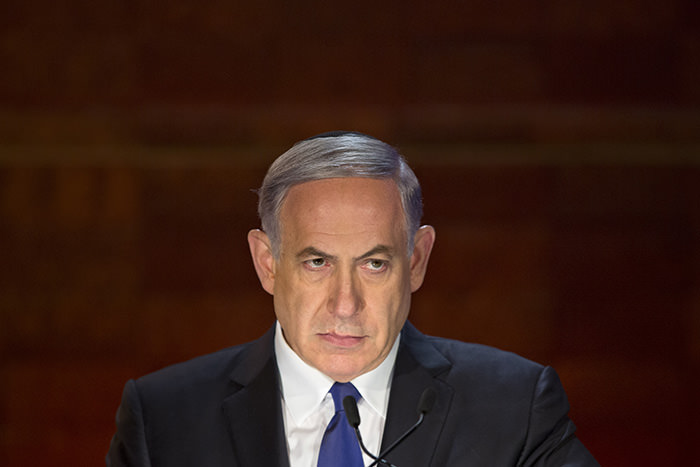 |AP Photo
by Daily Sabah May 14, 2015 12:00 am
The basic guidelines' document of the Israeli new coalition lead by the Israeli Prime Minister Netanyahu, "bears no mention of the solution of two states for two peoples, nor does it include any intention of establishing a Palestinian state", according to Israeli daily Haaretz. This is despite Obama's calls to show a real commitment to the two state solution which envisages an independent State of Palestine based on the pre-1967 borders, alongside the State of Israel, as suggested by United Nation.

The guidelines' document, which was submitted to the Knesset on Wednesday, includes only a general statement according to which, "the government will advance the diplomatic process and will strive for a peace agreement with the Palestinians and with all of our neighbors", as quoted by Haaretz.

Earlier this week, U.S. President Barack Obama revealed in his talk to Asharq Al-Awsat Daily newspaper on the Palestinian issue, that "We have a very difficult path forward" as he referred to the "serious questions about overall commitment to a two-state outcome".

Obama also stated that the U.S. looks forward to "the new Israeli government and the Palestinians to demonstrate—through policies and actions—a genuine commitment to a two-state solution.". Obama stressed Palestinains' right to live in an independent and sovereign state.

He also said: "As I said in my speech to the Israeli people on that same trip (referring to his trip to Ramallah and Tel Aviv two years ago), peace between the Israelis and Palestinians is necessary, it is just, and it is possible."

Obama again expressed his hope for peace, saying that "I will never give up on the hope for peace between Israelis and Palestinians". Meanwhile, Netanyahu maintained his position on the two-states solution, as the wording of his political clause remained identical to the wording used in his previous governments in 2009 and 2013. This indicates that negotiations between Israel and the Palestinian Authority will be difficult under another Netanyahu-led government, which won the elections in March 2015, especially with the on-going conflicted relationship between Barack Obama and Netanyahu.
Last Update: May 14, 2015 5:43 pm
RELATED TOPICS