The changing state of the Assad regime 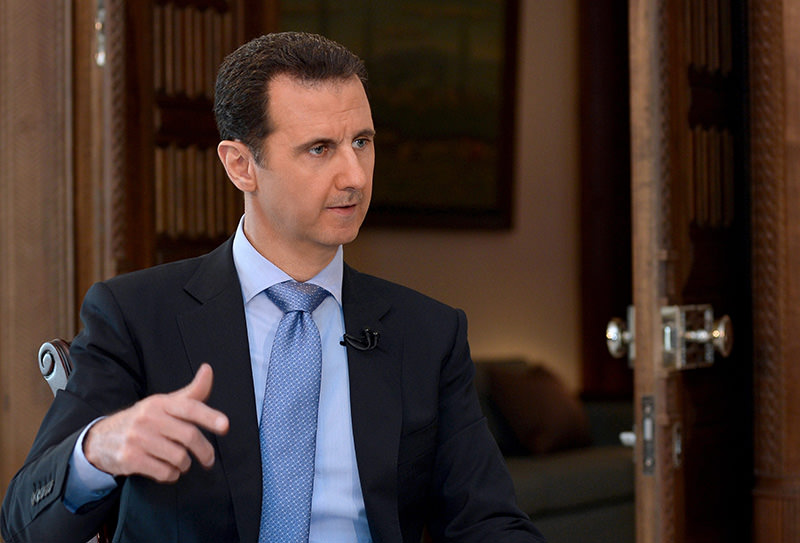 Since 2011, many claims have been made for the imminent collapse of the Assad regime. But they have all only been guesses, as the winning side on the ground changes rapidly and the regime is closed to the outside world

Since the Syrian civil war began in 2011 after peaceful pro-democracy protests were violently suppressed by the regime, the winning side has shifted frequently. While rebels claim to have made significant gains, the regime and pro-regime militias report that they repel the attacks. In the last four years it has often been claimed that the regime was about to collapse due to various reasons. The diverse opposition groups have also been involved in internecine clashes, as the Islamic State of Iraq and al-Sham (ISIS) and the other moderate groups have disagreed over leadership and the future of the Syrian state. Ever since 2012, when rebels gained strategic positions both in the north and the south of the country, debates have raged over how to administer Syria after the war, while the involvement of Lebanon's Shiite group, Hezbollah, and the Iranian Revolutionary Guards has been presented as a turning point in the war in favor of the regime. Aron Lund, in his article published by Carnegie on Wednesday, also underlined the rapidly shifting situation and said: "The narrative shifts every now and then. [Syrian President Bashar] Assad was losing from March 2011 until around October 2013, then he was winning for about a year and a half, and now he is back to losing again. The story is consistent only in that it remains reliably hung up on the extremes of victory or defeat."

The war stabilized in the last six months and the parties were making small gains until the seizure of Idlib last month by al-Qaida's Syrian branch, al-Nusra Front, Ahrar al-Sham and some other moderate groups unified under the umbrella of the Fatah Army. The pro-opposition activists reporting from Syria said on twitter that the rebels were heading to Latakia, Assad's ancestral home. It was established as fact that regime troops near Idlib and Hezbollah in the Qalamoun Mountains had retreated. The regime accused Turkey and Saudi Arabia of cooperating against Syria and asked for more help from Iran. Opposition groups and supporters cheered the gains and announced that ultimate victory was close. Some rumors emerged claiming that Assad's cabinet and some senior regime members were disappointed with Assad's rule. The Daily Telegraph on Monday reported that Assad would be toppled by the intelligence chief, Ali Mamlouk, who was secretly cooperating with Turkey and the opposition. "The Assad regime has placed its intelligence chief under house arrest after suspecting he was plotting a coup, in a sign that battlefield losses are setting off increasing paranoia in ‎Damascus," the article wrote. A senior regime source was quoted as saying that "Mamlouk had been communicating with Turkish intelligence through an intermediary." However, a few days later, Mamlouk was seen together with Assad while holding a meeting with an Iranian envoy. In an op-ed published by United Arab Emirates-based The National, the author Hassan Hassan claimed that the Alawite officers were dismayed with Iranian involvement that had caused certain officers who had served the army for many decades to fall from grace. "Long-standing Alawite officers believe that they, along with their family members, have built Syria's security and military institutions over decades. When Iranian and Hezbollah officers started to take a lead role in the conflict in 2011, many of those officers felt alienated. While such tensions do not always bring action, such discontent is becoming more obvious as generals leave their jobs to sit at home or leave the country. Many of them blame the president for mismanaging the conflict and for empowering Iranian and Hezbollah operatives at the expense of the army generals. The sources say that the high-level army leadership that commanded the military for decades is now almost nonexistent. Instead, the regime has replaced them with lower-ranking officers who have little experience and so have become reliant on Hezbollah and the Iranians. Since the conflict began, scores of officers have exited the stage, either killed in action, assassinated, defected or because they simply preferred to stay on the sidelines. Some other officials have left the country," the author wrote. Basing his article on the claim that the state of Syria has collapsed but the Assad regime has remained, Hassan suggests that the regime is divided over Iranian involvement while pro-regime officers frequently state that the regime would not stand without Iranian support. However, it is not possible to confirm the claims as the regime is quiet secretive.

Another explanation as to why the regime will collapse soon is based on economic indicators. Economic studies by the U.N., the International Monetary Fund (IMF) and independent economists paint a pessimistic but unsurprising picture of Assad's Syria. Gross Domestic Product is now half of what it was three years ago, according to the IMF, as the regime has lost more than half of its territories. Oil production has effectively ground to a halt as ISIS has captured most of the oil-rich areas. Inflation is now at 50 percent as the production of goods has drastically decreased. Exports and imports are both reduced by 90 percent as international sanctions are strictly applied by the West. Unemployment is at 50 percent as there is no opportunity to create job opportunities.‎

Even so, the interviews, conducted with either opposition members or regime supporters, indicate that it is very difficult to see an ultimate winner of the war on the ground. The Assad regime suffers from internal and economic problems as well as international isolation. However, it is difficult to predict when the war will be over or the regime will come to an end. The explanation of a Syrian waiter, Salah, who fled to Istanbul after leaving his family, four-floor building, car and everything he owned behind, is worth hearing: "The big powers, i.e., Russia, the U.S., Iran and Saudi Arabia, are in conflict with each other. They do not want to turn their lands into war zones or send their own children to fight. The rival powers chose Syria to fight. We are just the victims. Even if Assad falls, the war will not end."
Last Update: May 15, 2015 5:32 pm
RELATED TOPICS